Biden Must Avoid Another Fiasco With Iran After Afghanistan Debacle 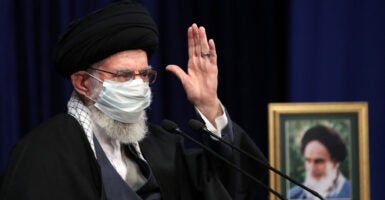 The American debacle in Afghanistan is likely to be interpreted by Tehran as a sign of the Biden administration’s diminishing determination to protect American security interests in the region. Pictured: Iranian Supreme Leader Ayatollah Ali Khamenei delivers remarks about the Iran nuclear deal in February. (Photo: Iranian Leader Press Office/Handout/Anadolu Agency/Getty Images)

President Joe Biden opted to continue with a half-baked “peace agreement” with the Taliban that he inherited from the previous administration and the results were disastrous.

Now, the Biden administration is on the verge of making a similar mistake by seeking to resurrect the flawed 2015 nuclear agreement with Iran negotiated by the Obama administration.

Like the Taliban, which refused to abide by its commitment to reduce its attacks and break ties with al-Qaeda, Iran’s Islamist regime has repeatedly violated its nuclear nonproliferation commitments.

Tehran has steadily escalated its violations of the 2015 nuclear agreement, which the Trump administration withdrew from in 2018. It also has violated its obligations under its Nuclear Nonproliferation Treaty Safeguards Agreement by concealing nuclear activities and restricting the access of International Atomic Energy Agency inspectors.

The 2015 nuclear deal also enabled Iran to escalate its threats to U.S. allies and regional stability. Iran pocketed the sanctions relief provided under the agreement and used the economic windfall to finance its aggressive intervention in Syria in 2015 and strengthen its proxy militias in Iraq, Lebanon, and Yemen.

These adverse regional consequences would be further amplified if the United States again suspends sanctions by returning to the nuclear deal.

Iran also has provided extensive support and missile technology to Hamas, which has transformed Gaza into a base for attacking Israel. In addition, Iran has transferred ballistic missiles and drones to proxies such as Hezbollah, Iraqi militias, and the Houthi movement in Yemen—all in violation of the United Nations Security Council resolution that endorsed the 2015 nuclear agreement.

Iran is one of the biggest winners of the Taliban’s triumph in Afghanistan. Although Tehran has clashed in the past with the Sunni extremist Taliban, which abhors the Shiite interpretation of Islam practiced in Iran and by some of Iran’s Afghan allies, both Islamist movements violently oppose the U.S. and Western influence.

The chaotic U.S. retreat from Afghanistan and the planned drawdown of U.S. troops in Iraq has alarmed U.S. allies in the Middle East threatened by Iran. The American debacle in Afghanistan also is likely to be interpreted by Tehran as a sign of the Biden administration’s diminishing determination to protect American security interests in the region.

The Biden administration should not compound these adverse trends by reviving the Iran nuclear agreement, which was a Faustian bargain that rewarded Tehran with long-term sanctions relief in exchange for short-term restrictions on its nuclear program.

Key aspects of the agreement have already started to expire. The U.N. lifted its arms embargo last October despite Iran’s repeated violations of its import restrictions and export prohibitions.

A series of sunset clauses remove constraints on Iran’s ballistic missile program in 2023, and on its advanced centrifuge program in 2024. In 2025, the U.N. Security Council will end its focus on the Iran nuclear issue and international monitors will stop regulating Iran’s imports of nuclear-related equipment.

By 2031, key restrictions on uranium enrichment and plutonium production will lapse, allowing Iran to ramp up its nuclear program to an industrial scale that would make a sprint to a nuclear breakout much easier.

The Biden administration has recognized the need to lengthen and strengthen the weak restrictions built into the nuclear deal, which amount to little more than a diplomatic speed bump that delays but does not halt Iran’s progress toward a nuclear weapons capability.

Secretary of State Antony Blinken declared his intention to negotiate a follow-on agreement that will extend key nuclear restrictions scheduled to fade away.

But if the Biden administration lifts sanctions to return to the flawed agreement, it will squander the diplomatic and economic leverage amassed by the Trump administration’s maximum pressure sanctions strategy and lose any chances for a better agreement.

Rather than returning to a defective agreement whose key nuclear restrictions progressively expire, the U.S. should insist on reaching an effective new deal that permanently restricts Iran’s nuclear program.