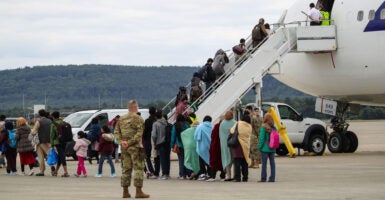 Afghan evacuees board a plane to the United States at the U.S. Air Base Ramstein, Germany, on Aug. 26. The Ramstein Air Base, the largest U.S. Air Force base in Europe, hosts thousands of Afghan refugees. (Photo: Armando Babani/AFP/Getty Images)

Rep. Mike Waltz, a colonel in the National Guard and a decorated Green Beret, is frustrated with what he describes as the State Department’s “risk aversion,” which he blames for preventing the military from quickly locating and rescuing all Americans still stranded in Afghanistan.

With the evacuation window beginning to close, the Florida Republican is urging the Biden administration to take bolder action to track down and extract Americans and Afghan allies who have worked for or assisted the United States.

Waltz wants to see more rescue missions, even if it means sending U.S. special operators into the interior of the country, far from the Kabul airport, where 5,800 American troops are anchored to help with the airlifts.

Some of those extractions, using helicopters and Central Intelligence Agency personnel and U.S. ground troops, are taking place on a limited basis. But Waltz, an Afghanistan War veteran, and other like-minded members of Congress are pushing the administration to authorize far more such missions with the clock ticking on the Aug. 31 deadline for U.S. withdrawal.

President Joe Biden has said he wants to keep the deadline because he thinks the risk of a terrorist attack will increase the longer the U.S. military remains present—even as Group of Seven leading industrial nation allies have pleaded for more time to get their people out.

“The sooner we finish, the better,” Biden said Tuesday. “Each day of operations brings added risk to our troops.” Pressed by a reporter on Wednesday on what he would do if Americans are still trapped in Afghanistan after the deadline, Biden tried to make a joke.

“You’ll be the first person I call,” the president said with a laugh.

During a briefing by Pentagon officials to members of Congress on Tuesday, Waltz said it was clear that the U.S. military has the ability, the technology, and the resources to conduct the rescue missions, but top officials aren’t authorizing enough of them.

“They have the assets in place,” Waltz told RealClearPolitics. “This is risk aversion about upsetting this detente situation with the Taliban.”

Frustration among Waltz and other veterans about the slow-walking of evacuations has grown as they have watched British and German special forces carry out rescue missions in Kabul and elsewhere to get their citizens out of Afghanistan. The U.S. military has even provided “Little Bird” helicopters—designed for surgical strikes—to help German commandos evacuate their citizens from Kabul.

The U.S. government says it has evacuated more than 95,000 people as of Wednesday, including at least 4,500 Americans, while communicating with 500 more on efforts to airlift them out. That leaves fewer than 1,000 Americans who have said they want to leave still stranded in the country, although it does not account for Americans who may be struggling to get in touch with the State Department.

National security adviser Jake Sullivan earlier this week stressed that the department has sent out numerous emails and texts to U.S. citizens known to be in the country, trying to coordinate safe passage to the airport, Waltz noted.

“Well, congratulations, but at the end of the day, we should have had a much clearer picture of what Americans we had where, what their locations were, what their intentions were,” he said.

The State Department issued an alert early Wednesday, telling Americans and Afghans trying to leave that the “U.S. government cannot ensure safe passage to the airport,” and instructing them to wait for email updates rather than calling the U.S. Embassy for the latest guidance, because the “situation in Kabul continues to change quickly.”

As the U.S. and other Western troops rushed to evacuate as many foreign nationals and Afghans as possible, the U.S., British, and Australian governments have urged crowds trying to access the Kabul airport to leave that area, warning of a “high threat” of a “terrorist” attack.

Waltz said there should have been a number of safe zones set up for Americans to gather for coordinated airlifts with an agreement from the Taliban not to impede or threaten the departure in any way. “We need to be telling them about consequences [for them], not getting dictated to,” he added.

One widely used, U.S. military-developed technology that could have made locating and rescuing Americans far easier was rejected for use in Afghanistan just days ago, according to several defense industry sources, although it’s unclear whether the military and CIA have started using it in the limited extraction missions they are now conducting.

The U.S. government went more than a week without using the precision-mapping technology, even though numerous federal and state agencies have used it to rescue more than 2,000 people during seven hurricanes since 2017, including Harvey, Irma, and Florence, sources told RealClearPolitics. It also has been used by state firefighting agencies to help federal and local law enforcement agencies coordinate security for big global events, such as U.N. General Assembly meetings and the 2020 Super Bowl.

Secretary of State Antony Blinken on Wednesday described the struggle to locate and connect with Americans who want to leave Afghanistan, but cannot safely get to the airport. He estimated that there may be as many as 1,500 of them and stressed that the U.S. government is “aggressively reaching out” or working to make contact.

Part of the difficulty, Blinken said, is that the U.S. government does not track Americans’ movements when they travel around the world, and some do not register with the embassy when they arrive in Afghanistan or do not de-register when they leave.

But once the State Department is in touch with those in country, the military and numerous other government agencies have mapping technology that can easily pinpoint Americans and Afghans who either have Special Immigrant Visa status or have applied for it, as well as their families. Despite the capability, Biden administration officials earlier this week rejected a proposal to use it, the sources told RealClearPolitics, attributing the move to an interagency decision involving the State Department and the Special Operations Command Central.

A Pentagon spokesman referred a question about the decision to the State Department, which declined to comment on internal discussions about “specific tools or operations … due to security and privacy considerations.”

“We are continuing to contact the Americans who have registered with Embassy Kabul to determine whether or not they are still in Afghanistan, and to help them evacuate if they want to leave,” a State Department spokesperson told RealClearPolitics. “We are executing plans on the ground to move Americans and their immediate family members to safety and into the airport compound.”

Republicans and several Democrats have repeatedly slammed the Biden administration for declining to extend the Aug. 31 withdrawal deadline to guarantee the safe evacuations of all Americans and people who have applied for a Special Immigrant Visa. That program is intended to provide a pathway to the United States for Afghans who were employed by or worked on behalf of the U.S. government in some capacity.

“The Biden administration is not lacking the resources. They’re lacking the will to get our people out,” Rep. Jim Banks, R-Ind., a Navy reservist who deployed to Afghanistan in 2014 to 2015, told RealClearPolitics. “All our resources and energy should be focused on getting Americans home safely.”

Waltz agrees and blames the White House’s decision to put the State Department, instead of the military, in charge of evacuation efforts. “Part of the overall problem right now, fundamentally, is that State is in the lead and not [the Pentagon] on this,” he said.

This article first appeared at RealClearPolitics.com.