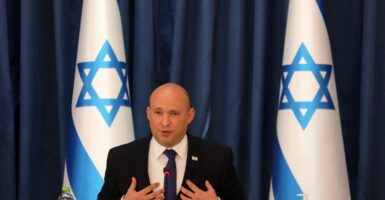 Although Washington’s attention has been riveted on Afghanistan, Israeli Prime Minister Naftali Bennett’s visit to the Oval Office on Aug. 26 will prompt the Biden administration to refocus on the slow-motion Iran nuclear crisis, which is fast approaching a critical juncture.

Iran’s nuclear brinkmanship has reached dangerous proportions. Not only has Tehran violated the 2015 nuclear agreement that the U.S. withdrew from in 2018, it also has repeatedly violated its obligations under its Nuclear Nonproliferation Treaty Safeguards Agreement by concealing nuclear activities and restricting the access of inspectors of the International Atomic Energy Agency.

Iran also has failed to address the nonproliferation concerns of International Atomic Energy Agency inspectors who discovered discrepancies at three nuclear sites. If Tehran continues to stonewall the agency on these issues, the issue could be referred to the U.N. Security Council in the coming months.

In recent months, Iran also has orchestrated a steady drumbeat of proxy attacks on U.S. military advisers in Iraq, sought to kidnap an Iranian dissident in New York City, and ratcheted up covert attacks on Israeli-owned cargo ships.

Bennett has indicated that Iran would be the core issue to be discussed in his meeting with President Joe Biden, their first face-to-face meeting since both took office earlier this year.

The Israeli leader reportedly will present Biden with a strategy for confronting Iran’s nuclear challenge and its regional threats without returning to the 2015 nuclear agreement.

Bennett will argue that Iran’s nuclear program has advanced too far to be adequately constrained by the progressively diminishing restrictions built into the nuclear deal, which lapse over time.

Israel opposed the nuclear deal from the beginning because key restrictions end by 2030, and the agreement did not address Iran’s growing missile threat and regional proxy attacks.

Moreover, the sanctions relief provided by a renewed agreement would boost Iran’s potential threats to Israel on those and other fronts.

Bennett has avoided the bitter public criticism of U.S. policy that his predecessor, Benjamin Netanyahu, unleashed against the Obama administration. The Israeli leader hopes to quietly persuade Biden to toughen his negotiating demands with Tehran.

The Israelis argue that Raisi is an untrustworthy negotiating partner who is unlikely to fulfill his commitments.

Bennett is likely to expand on that analysis in an effort to urge a hardening of U.S. Iran policy in his meeting with Biden. He also is likely to seek a green light, or at least a free hand, for Israel’s covert campaign to set back Iran’s nuclear program through sabotage.

Given Iran’s continued nuclear brinkmanship and regional proxy attacks, Biden would be wise to reach a consensus with America’s most important Middle East ally on how to cooperate to avert and deter an Iranian nuclear breakout, while defeating Iran’s aggressive proxy strategy.

Palestinian Issue on Back Burner

Although Bennett’s agenda at the meeting will be focused on Iran, the White House has signaled that the Palestinian issue also will addressed.

Israel and Hamas fought an 11-day war in May after Hamas launched rockets at Israeli civilians from Gaza.

The two leaders are likely to discuss options for reinforcing the fragile truce that ended the fighting, without undermining Israel’s deterrence of Palestinian terrorism.

Given the wide recognition that the Israeli-Palestinian dispute will not be ripe for a diplomatic resolution anytime soon, the Biden administration is not expected to go beyond pro forma statements of support for a two-state solution and calls for restraint on building new settlements that could make reaching such a solution even more unrealistic.

Biden does not want to destabilize Bennett’s fractious governing coalition by pushing too hard on the Palestinian issue. Biden would be better off working with Bennett to expand the Abraham Accords to include other Arab states, particularly Saudi Arabia, if possible.

Saudi Arabia, like Israel, is not only threatened by Iran, but also by Islamist terrorist groups that have been energized and emboldened by the Taliban victory in Afghanistan.

The Biden administration’s ill-considered withdrawal from Afghanistan has opened up a Pandora’s box of problems for the United States and its allies.

Biden should assure Bennett that he will not open up another dangerous box by returning to a weak and illusory nuclear agreement that would allow Iran to pocket billions of dollars in sanctions relief and enhance its threats to Israel and to the United States.