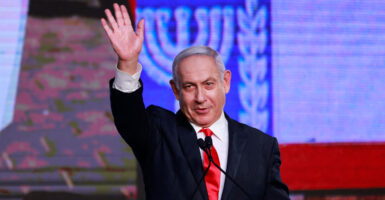 Benjamin Netanyahu has once again been elected Israel’s prime minister, but he faces a difficult task in forming a coalition government. Pictured: Betanyahu waves to supporters at the Likud Party’s campaign headquarters in Jerusalem early on March 24. (Photo: Menahem Kahana/AFP/Getty Images)

Benjamin Netanyahu, Israel’s longest serving prime minister, appears to have eked out a slim electoral victory in the March 23 parliamentary elections, but he faces a difficult task in forming a coalition government for the seventh time.

Netanyahu’s conservative Likud Party won the largest number of seats in the Knesset, Israel’s parliament. But no party has ever governed alone due to Israel’s kaleidoscopic multi-party political environment. A total of 13 parties won seats in the Knesset in this election.

Neither Netanyahu nor his rivals have a clear path to a ruling coalition, with 95% of the votes counted. Likud is projected to win 30 seats in the 120-seat Knesset. Together with allied religious and nationalist parties, it could claim 52 seats, nine short of the 61 seats needed to form a government.

Netanyahu’s chief rival, Yair Lapid, a former finance minister who leads the center-left party Yesh Atid (“There is a Future”), came in second with 17 seats. He could form a multi-party coalition with 57 seats, four seats short of a majority. But Lapid faces an uphill struggle to become prime minister because right-wing anti-Netanyahu parties will find it difficult to rally around him.

The balance of power is likely to be decided by two uncommitted parties:

Yamina’s Bennett may emerge as a kingmaker, because Arab political parties have never joined a governing coalition, and they remain unsuitable partners for many nationalist parties.

Netanyahu has appealed for unity, particularly from Likud defectors who have joined splinter parties. “I don’t disqualify anyone from sitting with me,” he said, “because the state of Israel demands a stable government.”

The election results resembled those of the last three elections, in which Israeli voters split roughly down the middle on whether Netanyahu should be allowed to extend his now 14-year rule as prime minister. Three elections in the past two years failed to produce a stable government.

The last election, in March 2020, produced an unwieldy, short-lived emergency government in May that was formed to guide Israel through the COVID-19 pandemic, but collapsed when it failed to agree on a national budget in December. Benny Gantz, the leader of the centrist Blue and White opposition party that joined Netanyahu’s emergency government, was punished for doing so by voters this time around, winning only eight seats, compared to 33 last time.

The election essentially was a referendum on Netanyahu’s leadership. Although he deservedly earned widespread popular support for his effective leadership on foreign policy and national security matters, his support has recently eroded due to a cloud of corruption charges.

Unlike previous elections, this campaign was the first to be conducted after the start of his trial for fraud, breach of trust, and accepting bribes in three cases. He has denied any wrongdoing and has dismissed the charges as a witch-hunt by politically biased law enforcement and media institutions.

Netanyahu’s legal problems, however, weakened his support within Likud, which led Netanyahu’s former protégé, Gideon Saar, to break away to form his own New Hope party, slated to win six seats that were claimed by Likud in the last election.

The Uncertain Road Ahead

Israeli political leaders now are engaged in intense backroom negotiations as they strive to assemble a ruling coalition and maximize their own leverage within a coalition.

Official results will be presented on Wednesday to Israel’s president, Reuven Rivlin, who will appoint a leader to form a government. That leader has up to 42 days to put a coalition together. If that nominee fails, the president will ask others to try.

If nobody succeeds, Israel will move on to a fifth election, an outcome that very few Israelis want. Israel already has endured three inconclusive elections that have plunged it into a prolonged political crisis as the prime minister struggles for his political survival.

Netanyahu, the dominant politician of his generation, has shifted the center of Israeli politics sharply to the right. If he manages to reach 61 seats, he is likely to form the most conservative and religious coalition in Israel’s history.

But unlike past elections, in which the prime minister’s chief political rivals attacked from the left, this time Netanyahu faces an unprecedented number of challengers and estranged former political allies on the right.

This fractured right wing makes it harder for Netanyahu to cobble together a ruling coalition. That could set the stage for Naftali Bennett, the leader of Yamina, a coalition of right-wing parties, to emerge as a potential kingmaker, particularly if Netanyahu can lure defectors from other parties to join a coalition. Bennett supports the same hardline ideology as the Likud Party, but has a strained personal relationship with Netanyahu, his former mentor.

Bennett is likely to play a key role in the complex coalition negotiations that now dominate Israeli politics. Those simultaneous multilateral consultations are likely to last for several weeks, and perhaps months.

Even if the negotiations succeed, Israel is unlikely to gain a functioning new government until early May. If no leader can form a coalition government, then Israel will be forced to hold another round of elections, with Netanyahu staying on as a caretaker prime minister.