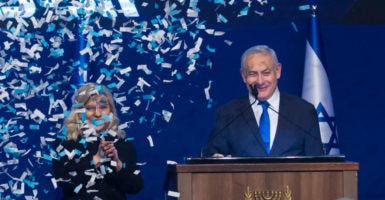 Israeli Prime Minister Benjamin Netanyahu did better than expected in Israel’s March 2 elections, but nevertheless still might lose his job.

Netanyahu is seeking a record fifth term in office, after serving as prime minister from 1996 to 1999, and since 2009. He may be blocked from forming a governing coalition once again, however, as he was in stalemated political negotiations after inconclusive elections in April and September of 2019.

Netanyahu, the longest-serving prime minister in Israeli history, won a significant political victory as his Likud party re-established itself as the largest party in the Knesset, Israel’s parliament.

In Israel’s third election in less than a year, Likud won 36 seats (up from 32 in the September election), eclipsing its biggest rival, the center-left Blue and White party, which again won 33.

However, Netanyahu failed to restore the 61-seat majority that he assembled with allied political parties in elections that he won in 2015, but lost in 2019.

The alliance of right-wing and religious parties that formed Netanyahu’s previous government this time won 58 seats, three short of the majority needed to form a government in the 120-seat Knesset.

Netanyahu, who campaigned under a cloud after he was indicted in December on corruption charges (which he vehemently denies), outperformed expectations. He thanked voters for the “biggest win in my life” in his victory speech.

But it remains unclear whether he can break through the political stalemate that has prevented the formation of a coalition government after the past two elections.

Israel now is in the midst of a lengthy period of political maneuvering and horse-trading as Netanyahu and Blue and White leader Benny Gantz compete to cobble together a ruling coalition in Israel’s fractured and polarized political environment.

In the prior election in September, Netanyahu won the support of 60 Knesset members, but still couldn’t reach the 61-seat majority needed to form a governing coalition.

If neither Netanyahu or Gantz is able to form a government—as happened after the two previous elections—then Netanyahu would continue as a caretaker prime minister until Israel stages a fourth election.

Netanyahu was expected to benefit from the recent unveiling of President Donald Trump’s peace plan. But the Trump plan also was embraced by Gantz and appeared to have had little impact on the outcome of the election.

A bigger factor was that Netanyahu was aided by an effective get-out-the-vote effort that used sophisticated data to reach out to Likud voters and potential supporters to encourage them to cast their ballots.

Netanyahu also outmaneuvered Gantz, the former chief of general staff of the Israel Defense Forces. Gantz was an exemplary general, but an unfocused candidate with limited political instincts who was an uninspiring public speaker.

Netanyahu and his supporters aggressively criticized Gantz as an inarticulate, weak, and possibly corrupt leader, hinting without proof that a criminal investigation of a startup company that Gantz was involved with could implicate him.

Gantz ran a reactive and defensive campaign, forced to publicly deny that he suffered from mental problems or was vulnerable to blackmail after critics made unproven allegations that there was embarrassing information on his phone, which had been hacked by Iranians.

These charges put Gantz on his back foot and diverted attention away from Netanyahu’s own political vulnerability; namely, his indictment on charges of fraud, bribery, and breach of trust.

Netanyahu is seeking to form a government before his trial begins on March 17.

If he enters the courtroom as the sitting prime minister, it would strengthen his legal defense and bolster the argument that the public voted to put him back in office, but the legal proceedings would circumvent the public will.

Forming a government would also enhance Netanyahu’s leverage to seek a plea deal or promote legislation to gain immunity from prosecution.

If convicted, he would have to resign as prime minister. Meanwhile, he is actively engaged in retaining his office by building a governing coalition.

Netanyahu’s options include reaching a deal with political parties outside his coalition or trying to attract individual defectors from those parties.

Many Israelis are rooting for a government of national unity that would include the Likud and Blue and White parties, while easing political polarization. Gantz, however, has refused to join a governing coalition that would require him to serve with or under an indicted prime minister.

Gantz might eventually reconsider that stance. He knows that he could be replaced as the leader of the Blue and White party if he fails to defeat Netanyahu for the third time. Moreover, Israel’s centrist parties historically have disintegrated if they have repeatedly been excluded from governing coalitions.

Yet instead of joining a coalition with Likud, Gantz is seeking a deal with Avigdor Lieberman, the leader of the secular nationalist Israel Our Home party.

A maverick politician who once was a close aide to Netanyahu before breaking with Likud to form his own party, Lieberman refused to join Netanyahu’s coalition last year because it refused to support Lieberman’s push to end military exemptions for ultra-Orthodox Jews.

On March 9, Lieberman and Gantz announced a tentative agreement to work together to form a new government. In addition to Lieberman’s seven Knesset members, Gantz hopes to attract the support of most of the 15 members of the Joint List, a coalition of four predominantly Arab parties.

That’s a risky move because Lieberman in the past has ruled out supporting any government that included the Joint List. But after meeting with Gantz on March 9, he said that “the worst option is a fourth election,” implying that he could accept a tacit alliance with the Arab parties.

Gantz’s efforts to gain the support of the Joint List also could backfire within his own party. At least two of Blue and White’s Knesset members reject any cooperation with the Arab parties and could defect to Netanyahu.

The bottom line is that more than a week after Israel’s elections, it remains unclear whether any leader is capable of reaching the 61-seat threshold necessary for forming a coalition government.