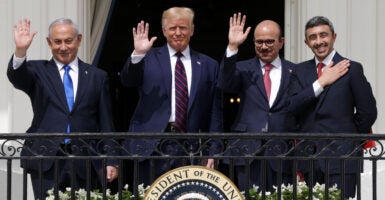 The Abraham Accords have the potential to expand to other Arab countries and bring lasting peace in the Middle East, President Donald Trump and leaders from Israel, the United Arab Emirates, and Bahrain said Tuesday at a signing ceremony on the South Lawn of the White House.

“This day is a pivot of history. It heralds a new dawn of peace,” Israeli Prime Minister Benjamin Netanyahu said before signing the agreements for peace and trade with the UAE and Bahrain.

The Israeli leader later predicted that “because this peace will eventually expand to include other Arab states … ultimately, it can end the Arab-Israeli conflict once and for all.”

None of the countries that signed the agreement is in conflict currently, but the UAE and Bahrain previously resisted recognizing Israel as they pushed for a Palestinian state.

The leaders suggested more countries would come on board, and expanding relations between Israel and Arab states has the potential to pressure the Palestinian Authority leadership to come to the table for realistic negotiations.

Trump also embraced the historic nature of the moment and has touted it as a major foreign policy achievement.

“These agreements prove that the nations of the region are breaking free from the failed approaches of the past,” the president said, adding:

Today’s signing sets history on a new course, and there will be other countries very, very soon that will follow these great leaders.

The peace deal prompted Christian Tybring-Gjedde, a member of the Norwegian parliament, to nominate Trump for a Nobel Peace Prize.

“This peace accord—which is a historic achievement for the United States of America, the state of Israel, and the United Arab Emirates—will continue to have a positive impact, as we believe that its reverberations will be reflected on the entire region,” he said, later adding:

Every option other than peace would signify destruction, poverty, and human suffering.

Bahraini Foreign Minister Abdullatif bin Rashid Al Zayani called the occasion “a moment of hope and opportunity for all the peoples of the Middle East, and in particular for the millions in our younger generation,” adding:

For too long, the Middle East has been set back by conflict and mistrust, causing untold destruction and thwarting generations of the potential of our best and brightest young people.

Now, I am convinced that we have the opportunity to change that.