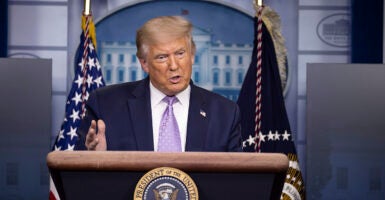 President Donald Trump speaks during a briefing at the White House on Aug. 13 on a range of topics, including his announcement earlier in the day of a new peace deal between Israel and the United Arab Emirates. (Photo: Tasos Katopodis/Getty Images)

Thursday’s announcement of a “historic peace agreement” between Israel and the United Arab Emirates–the first deal to normalize relations between Israel and an Arab nation brokered by the U.S. in over a quarter-century–is more evidence that President Donald Trump is the first president in a long time to get U.S. Middle East policy more right than wrong.

In a major concession, Israel will “suspend declaring sovereignty” over portions of the West Bank that Israeli Prime Minister Benjamin Netanyahu had planned to annex “and focus its efforts now on expanding ties with other countries in the Arab and Muslim World,” according to a joint statement issue by Trump, Netanyahu, and the leaders of the UAE.

Here’s the history of U.S. Middle East policy in the 21st century so far:

President George W. Bush: Jump in with both feet and try to fix everything. Result: failure.

President Barack Obama: Run away as fast as you can, and try to ignore everything. Result: epic failure.

President Trump: Stick around, put out the fires, and be friends to your friends–but insist they carry their fair share of the load for making their own neighborhood safe. Result: success.

The joint statement declaring the diplomatic breakthrough says it was made at “the request of President Trump.” This is just the latest sign that the Trump plan to bring peace between Israel and its neighbors is falling into place.

Let’s be honest. The Trump administration inherited a Middle East policy from the Obama administration that was collapsing faster than a bad day on the Dow.

Iran had become more belligerent after the Iran Nuclear Deal and its surrogates were on the march everywhere. ISIS was governing a murderous caliphate in parts of Syria and Iraq. Syria had collapsed in civil war. Iraq teetered. Israel faced increasing international isolation.

Yet Trump promptly turned a corner on every one of these setbacks for American policy.

Then the Trump administration started a campaign to develop a sustainable presence in the Middle East that protected vital U.S. interests. Meanwhile, the White House also strongly signaled the U.S. would not abandon its friends.

In particular, the Trump administration stopped limiting its support for Israel to progress in Israeli-Palestinian peace talks, which were going nowhere because the Palestinians refused to talk.

Further, the Trump administration stuck by strategic partners, such as Egypt, Turkey, and Saudi Arabia–even as they struggled and stumbled, sometimes bumping heads with each other, other countries in the region, and Washington.

Then the Trump administration added a vision of a Middle East Strategic Alliance. The alliance was designed to eventually knit Israel and Arab nations together into a collective framework that would be a force for stability and increasing prosperity in the region.

The alliance would not be a Middle East NATO. It would be a grouping with U.S. support and participation that would keep Iran at bay; combat transnational Islamist terrorism; preempt regional conflicts and humanitarian crises, and promote economic integration.

Trump hasn’t achieved that very ambitious goal–not by a long shot. But the agreement announced Thursday between the UAE and Israel demonstrates Trump is making progress at putting the building blocks for a sustainable security framework in place.

The UAE-Israel agreement shows Trump has been right on what is needed in the Middle East. Arab leaders can achieve more by engaging with Israel diplomatically than by boycotting diplomatic efforts to improve relations, as the Palestinian Authority has demanded.

Trump’s work isn’t done. Other Arab nations are likely to follow the UAE’s lead and sign normalization of relations agreements with Israel. The U.S. has already received private positive feedback from senior officials in other countries in the Gulf. Indeed, Bahrain could be next up to make permanent peace with Israel.

The Trump administration may well have crossed the tipping point in charting the future of U.S. policy so far that there is no going back, whether Trump is reelected or former Vice President Joe Biden wins the November presidential election.

Evidence of this was that while Biden is quick to criticize Trump on just about everything, the presumptive Democratic presidential nominee issued a statement praising the Israel-UAE agreement.

“Today, Israel and the United Arab Emirates have taken a historic step to bridge the deep divides of the Middle East,” Biden said in his statement. “The UAE’s offer to publicly recognize the State of Israel is a welcome, brave, and badly-needed act of statesmanship. And it is a critical recognition that Israel is a vibrant, integral part of the Middle East that is here to stay. Israel can and will be a valued strategic and economic partner to all who welcome it.”

So whether the U.S. is led by President Trump or President Biden beginning in January, there will likely be no Iran deal to go back to. In addition, while many in Washington would be happy to drop the hammer on Israel, Turkey, Saudi Arabia, and Egypt over a range of concerns real and imagined, the truth is that the U.S. has far more to gain working with powers in the region than against them.

Trump has delivered the best prospects to forge a positive path for the Greater Middle East since the end of the Cold War. Regardless of whether he or Biden win their election contest, it would be self-defeating for the next administration to take any course other than following through on the progress of the last almost four years.

It would also be wrong, peevish, and partisan not to acknowledge the achievements of U.S. statecraft under Trump.