6 Things to Watch During Cuba Protests 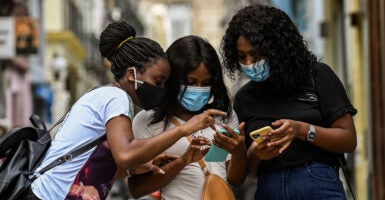 The pro-freedom protests in Cuba are fluid, but the communist dictatorship there seems willing to soften its tone and allow travelers to bring in food and medicines amid the unrest.

In the United States, Republicans called for the Biden administration to be more active in supporting protesters.

However, the U.S. and other free nations mostly seem to be condemning the Cuban government’s actions while waiting to see what happens next.

Here are six things to watch for in Cuba.

Cuba’s communist government, in a move seemingly designed to mollify protesters, announced Wednesday that it would lift restrictions on travelers bringing food, medicines, and hygiene products into the country, CNN reported.

For the first time, Cuban President Miguel Díaz-Canel made a concession about the regime’s shortcomings after previously blaming the U.S. and social media for the unrest, USA Today reported.

Díaz-Canel warned Sunday that protesters would face a strong response from the authorities, the Miami Herald reported.

However, by Wednesday, Cuba’s president used a slightly more conciliatory tone in a televised address, while still characterizing the protests as “violence.”

“We have to gain experience from the disturbances,” Díaz-Canel  said. “We also have to carry out a critical analysis of our problems in order to act and overcome, and avoid their repetition.”

Nevertheless, the United States is concerned about the crackdown on protesters that the Cuban government referred to as a “call to combat,” U.S. State Department spokesman Ned Price said Tuesday.

“We remain deeply concerned by the Cuban government’s quote ‘call to combat’ and by the images of violence we’ve seen over the past two days,” Price said. “We call for calm and we condemn any violence against those who are protesting peacefully. We equally call on the Cuban government to release anyone detained for peaceful protest.”

More than 100 Cubans were detained or are missing in the protests that began Sunday, CNN reported. So far, only one death has been reported by the Cuban government, a 36-year-old woman, according to USA Today.

Cuban authorities also blocked internet access after the pro-freedom protests broke out across the Caribbean nation, where Fidel Castro and his forces seized power in a communist revolution in 1959.

The United States, Canada, and the European Union criticized the arrests of political activists and journalists in recent days.

“We commend the people of Cuba for showing great bravery and strength of their will and the power of their voice,” Price said. “In response, the Cuban government has attempted to silence their voices and communications through internet shutdowns, violence, and arbitrary detentions of dozens of protesters, journalists, activists, and others.”

The protests began near the capital city of Havana, in a small town called San Antonio de los Baños, according to The New York Times.

Protesters called for liberty and reform, and also expressed frustration over food shortages—long a staple of the island nation’s communist regime—as well as the unavailability of COVID-19 vaccines.

As they marched on Havana and other cities throughout the country, protesters chanted, “We want freedom” and “We want vaccines.”

The unrest marks the first major protests in Cuba since 1994, largely because the government generally is able to suppress demonstrations.

In a swift departure from lax border policies in place since the Biden administration came into office Jan. 20, Homeland Security Secretary Alejandro Mayorkas told Cubans—and Haitians—fleeing political violence not to bother coming to the United States.

“Allow me to be clear. If you take to the sea, you will not come to the United States,” Mayorkas said.

This move also marked a historic break from the past, as the United States traditionally has granted asylum to Cubans fleeing persecution since the 1959 revolution.

“The time is never right to attempt migration by sea,” Mayorkas said. “To those who risk their lives doing so, this risk is not worth taking. … Do not risk your life attempting to enter the United States illegally.”

The Biden administration’s response has come under criticism from other fronts.

Talk show hosts and other pundits argued that Democrats assume that illegal immigrants from Mexico and Central America will vote for Democrats, but know that Cuban refugees tend to favor Republican policies.

The Biden administration expressed support for the protesters, but has been reluctant to criticize Cuba’s communist dictatorship.

One reporter asked this question Wednesday of White House press secretary Jen Psaki: “Do you think that people are leaving Cuba because they don’t like communism?”

Psaki didn’t give a straightforward response in answering that Cuban citizens are upset with “mismanagement” by their government.

“I think we’ve been pretty clear that we think people are leaving Cuba—or not—leaving Cuba or protesting in the streets, as well, because they are opposed to the oppression, to the mismanagement of the government in the country,” Psaki told reporters. “And we certainly support their right to protest. We support their efforts to speak out against their treatment in Cuba.”

Rubio called for Biden to gather the Organization of American States and the United Nations to bring collective pressure on Cuba to cease repressive actions against its people.

Rubio also faulted Deputy Assistant Secretary of State Emily Mendrala for a long history of calling for engagement with the Cuban regime.

The State Department came out with a strong defense of Mendrala, Fox News reported Thursday.

“Deputy Assistant Secretary Mendrala has years of experience—at the State Department, White House, and on Capitol Hill—working to support human rights and advance the cause of democracy in Cuba,” the State Department statement said. “The American and Cuban people are better off because of her continued public service.”

For now at least, Cuban authorities have restored internet access for Cubans, The Washington Post reported. Those with internet access restored were able to see images of the communist government’s crackdown on protesters, the Post noted.

Florida Gov. Ron DeSantis, whose constituents include numerous Cuban Americans with family members still in that country, had called for the United States to provide internet service to Cuban citizens, who live fewer than 100 miles from his state.

“I write to urge you to assist in providing internet access to the people of Cuba standing up against communist oppression and demanding a voice after decades of suffering under the yoke of a cruel dictatorship,” DeSantis, a Republican, wrote in a letter to Biden.

U.S. provision of internet access to Cubans is possible, DeSantis said, comparing the idea to U.S. broadcasts into communist countries during the Cold War to bypass state-run media.

Similar to the American efforts to broadcast radio into the Soviet Union during the Cold War in Europe, the federal government has a history of supporting the dissemination of information into Cuba for the Cuban people through Radio & Televisión Martí, located in Miami. In addition to sending information, however, our efforts must include creating a means for the Cuban people to speak to the world.

The White House did not yet have a clear policy on this, Psaki told reporters.

“Well, the lack of internet access, as you know … is a huge issue in Cuba and one that is very challenging for the people of Cuba so they can gain access to accurate information,” Psaki said. “We’re certainly looking at that to see what can be done to address [the issue], but in terms of that specific proposal, I don’t have an assessment of that.”

On Tuesday, China’s communist government essentially expressed support for Cuba’s communist regime and blamed the United States for the protests.

Chinese Foreign Ministry spokesman Zhao Lijian said that the “U.S. embargo is the root cause of Cuba’s shortage of medicines and energy.”

China firmly opposes foreign interference in Cuba’s internal affairs, firmly supports what Cuba has done in fighting COVID-19, improving people’s livelihood and upholding social stability, and firmly supports Cuba in exploring a development path suited to its national conditions. I’d like to stress that China stands ready to work with Cuba to implement the important consensus of the two heads of state and is firmly committed to deepening friendly relations between the two countries.

“This week’s glowing endorsement of the communist regime in Cuba while brave Cubans were taking to the streets demanding freedom is a grim reminder of China’s ongoing effort to gain a foothold in the Americas,” Pence said in a speech at The Heritage Foundation.

“To be clear, China must never be allowed to build a military base in Latin America or anywhere in the Western Hemisphere.”

Pence is a distinguished visiting fellow at Heritage, the parent organization of The Daily Signal.