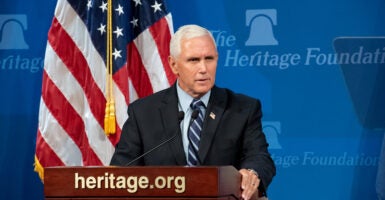 Former Vice President Mike Pence, in a major speech Wednesday on China, said that the communist regime is a more serious threat to the United States than the Soviet Union during the Cold War.

“In many respects, Communist China poses a greater challenge to the United States than the Soviet Union ever did throughout the Cold War,” Pence said at The Heritage Foundation, where he is a distinguished visiting fellow.

“Today, America is forced to confront China on two fronts,” he said. “One, against an authoritarian system and military bent on regional domination. The other, against powerful business interests and celebrities in our own country who openly aid and abet the communist regime.”

The former vice president asked his audience to imagine that the Soviet Union was America’s top trading partner during the 45-year Cold War, or that American name brands funded Soviet occupation of Eastern Europe and construction of gulags.

“To those of us old enough to remember the Cold War, it is beyond imagination. Yet this is precisely the situation we face today in what may well be an emerging Cold War with China,” Pence said, later adding:

America business leaders preach social justice at home while they profit from slavery abroad. They bolster their commitment to the environment while their facilities in China blacken the skies and choke our oceans with plastic.

They criticize America’s Founding Fathers while lauding a regime that murdered millions of its own citizens during the Great Leap Forward and perpetrated the massacre at Tiananmen Square.

Pence noted that former Secretary of State Henry Kissinger has said the United States is in “the foothills of a new Cold War” with China. The former vice president then singled out one company.

“Now is the time for leaders in America and the public and private sector to make a choice,” Pence said. “The CEO of Nike appears to have made his choice. He recently announced, and I quote, ‘Nike is a brand that is of China and for China.’ That probably explains why just a few years ago, they canceled the production of a shoe with an American flag.”

Pence said China seeks to stand atop a new global order “where freedom is constrained but Beijing’s power is not.”

He said that “the Biden-Harris administration is already rolling over to Communist China” by rejoining the Paris climate accord and the heavily Chinese-influenced World Health Organization.

“My sense is that China senses weakness in this new administration,” Pence said of President Joe Biden’s first six months in office.

He added: “The Chinese Communist Party is the greatest threat to our prosperity, security, and values on the face of the earth. China may not yet be an evil empire. But it’s working hard every day to become one.”

The United States must demand that China come clean about the origins of the coronavirus. The evidence strongly suggests the coronavirus leaked out of a Chinese lab. After 4 million deaths around the world, in a year of unspeakable hardship, the American people and the world deserve to know exactly what the Chinese Communist Party knew, when they knew it, and the specific actions they took based on that knowledge.

With regard to COVID-19, the disease caused by the new coronavirus, Pence stressed that the Biden administration should restrict U.S. tax dollars from funding China’s scientific research.

“Under no circumstance should the United States allow public or private funding of scientific laboratories in Communist China, especially those involved in gain-of-function research,” he said.

“Gain of function” describes a risky process of making a virus more dangerous or contagious for the purpose of studying a response.

Pence also talked about keeping a closer eye on Chinese companies that operate in the United States, calling for the banning of Confucius Institutes—known for conducting espionage as well as propaganda operations—from U.S. colleges and universities.

The former vice president opened his remarks by voicing support for the Cuban dissents seeking liberty and essential goods and services in protests across the Caribbean nation. Later, he noted China’s backing of Cuba’s communist government.

“This week’s glowing endorsement of the communist regime in Cuba while brave Cubans were taking to the streets demanding freedom is a grim reminder of China’s ongoing effort to gain a foothold in the Americas,” Pence said. “To be clear, China must never be allowed to build a military base in Latin America or anywhere in the Western Hemisphere.”

Pence followed that point saying the U.S. military should not be distracted with political considerations such as critical race theory and gender ideology. He noted a report by congressional Republicans that said the military is spending more time on wokeness than on readiness for war fighting.

“With the challenges we face at this critical time, the military brass at the Pentagon needs to stop wasting time on politically correct nonsense like critical race theory, and they need to start focusing on making sure our military remains the best-trained and best-prepared fighting force in the world,” Pence said.

Through all of this, Pence noted that although China is a power, it is a lonely one.

“Of the 14 nations that share a border with China, the only one it can claim as an ally is North Korea,” he said.

Heritage invited Pence to speak as this year’s B.C. Lee Lecture on international affairs. South Korea-based Samsung Group endowed the lecture in honor of its founder, the late B.C. Lee, to focus on the U.S. relationship with the Indo-Pacific.