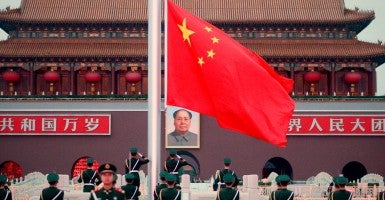 The portrait of late leader Chairman Mao Zedong is seen during a ceremony at the Gate of Heavenly Peace, featuring members of the People's Liberation Army. (Diego Azubel/Epa/Newscom)

Xi Jinping is set to visit the United States this week for his first official state visit as president of China.

Under Xi’s administration, China has experienced an intensification in extrajudicial imprisonment, rising persecution of religious minorities, and continuing suppression of the basic freedoms of individuals.

In 2015 alone, at least 220 human rights lawyers have been arrested, members of the Uighur minority group have been detained for their dubious connection to ISIS, and over 15,000 individuals were incarcerated for allegedly endangering Internet security.

Human rights challenges in China find their origin in the structure of Chinese society and Communist rule. Chinese society has historically placed a higher premium on the value of the collective as opposed to the individual. The Chinese Communist Party has reinforced this approach, as made manifest through its defense of its own human rights record.

Rather than addressing traditional human rights concerns like religious freedom or property rights, the Chinese Communist Party emphasizes progress in poverty alleviation, or improvements in peace and prosperity.

No doubt, China has lifted significant portions of its population of nearly 1.3 billion people out of poverty—a commendable achievement. China also increased literacy rates from 65 percent in 1982 to 96 percent in 2015.

But advances in collective rights have come at the inexcusable price of individual natural rights.

Since governments do not create these rights, they cannot be taken away. And natural rights, fundamental and integral to every individual, cannot be sacrificed for the betterment of the collective.

If China is to be a rights-respecting society, its duties are simple. The primary role for the government is to ensure that each individual has the ability to exercise his natural rights.

China has, thus far, failed to do so.

A History of Abuse

China has a long history of rights abuse. During the Great Leap Forward (1957-1960), Mao Zedong instituted policies of agricultural collectivization and redistribution of wealth that led to a severe famine. The famine resulted in the death of between 20 million and 43 million people.

Recent Heritage Foundation research found that the one-child policy has averted as many as 346 million births—many of them likely due to forced abortion under the CCP’s draconian attempts to limit population.

China’s abuses are not relegated to the past. While China allegedly shut down its re-education through labor camps in 2013, Amnesty International continues to estimate that at least 500,000 people remain in punitive detention facilities without charge or trial.

The State Department once again listed China as a country of particular concern, a designation it has received since 1999, for its continued and unprecedented persecution of religious minorities including Uighurs, Muslims, Christians (including Catholics), Tibetan Buddhists, and Falun Gong practitioners. And China is repeatedly criticized in the State Department’s annually released Human Rights Report for its practice of unlawful and arbitrary deprivation of life.

Why Xi Is Visiting

In the midst of China’s recent economic turmoil, Xi is hoping that his visit to the U.S. will increase his credibility and legitimacy as the governing authority of China.

If legitimacy is Xi’s aim, then human rights should be chief among his concerns. After all, the true legitimacy of a government is derived from its ability to protect and promote the rights of its peoples.

Xi’s visit to the U.S. is unquestionably important, but it is unlikely to result in any significant policy shifts. With the exception of a potential cyber security agreement, there are no big agenda items on the table.

The visit therefore provides an ideal opportunity to put pre-existing U.S. priorities in perspective and include human rights among them as a strategic policy objective.

Among other agenda items, the U.S. should press China for the release of the 22 human rights lawyers still in detention in China. The U.S. should also continue to press China on its promises to eliminate, once and for all, the re-education through labor camp (RTL) system. (China claimed to have eliminated the re-education through labor camp system in 2013 but continued to operate facilities under the guise of drug detention centers.)