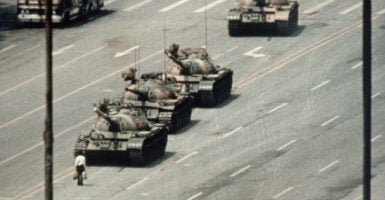 A Beijing demonstrator blocks the path of a tank convoy along the Avenue of Eternal Peace near Tiananmen Square. (Photo: Bettmann/Contributor/Getty Images)

This iconic image has become a symbol of the resilience of the Chinese people during the Tiananmen Square massacre. Hundreds to thousands of pro-democracy demonstrators were killed by communist troops from June 3 to June 5, 1989.

It is a visual representation of the Chinese people’s fight for freedom, and the great lengths that the Chinese government will go to in order to quash it.

This June 4 anniversary of the Tiananmen Square protests is especially ominous.

It comes during the growing collapse of the “one country, two systems” framework that preserved liberty and prosperity in Hong Kong since 1997. Vigils commemorating the events of Tiananmen Square have even been outlawed.

It’s being commemorated against the backdrop of the Chinese Communist Party’s gross mishandling of the response to the COVID-19 pandemic.

The oppression of the Chinese people is evident. Perhaps there has been no greater threat to freedom in China since Mao than Xi Jinping.

Xi has further tightened his grip on the levers of control. Widespread use of surveillance tracks ordinary Chinese citizens’ every move. Tracking is deployed for the purpose of measuring a person’s “social credit” to determine how well their personal behavior aligns with the Chinese Communist Party’s priorities.

The party is also undertaking efforts to Sinicize religion, making Christianity, Islam, Buddhism, and all other religions conform to Chinese characteristics—replacing the sacred with the secular.

All private life is considered public, therefore falling under the party’s control. This we know well from the now famous whistleblower Dr. Li Wenliang.

His attempts to sound the alarm about the novel coronavirus resulted in him being called in for questioning by Chinese authorities, being forced to recant his statement, and eventually, succumbing to death by the very virus he tried to alert the public about.

It is for the Chinese people that we commemorate the anniversary of Tiananmen Square. We mark their fight for freedom—recognizing it as a battle that has not yet been won. We remember their plight because it is a poignant reminder that freedom is not free and that it is absolutely worth fighting for and defending where possible.

There is a battle over values being waged in Asia. One model suppresses and undermines freedom while the other seeks to preserve and promote it. One system blurs the lines between public and private, while the other keeps those lines distinct. One embraces authoritarianism where the other embraces liberty.

The U.S. must stand on the side of values. That means standing unwaveringly with the people of China wherever freedom is under threat—whether in Hong Kong, Taiwan, Tibet, or in the People’s Republic of China.