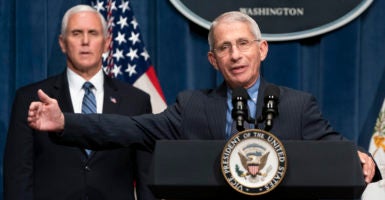 The five states that have been hit the hardest with a major uptick in positive tests for the new coronavirus are California, Texas, Florida, Arizona, and New Mexico.

“One of the things we are seeing among the new cases—we hear this in Florida, we hear this in Texas and elsewhere—is that roughly half of the new cases are Americans under the age of 35, which is at a certain level very encouraging news, the experts tell us,” Vice President Mike Pence said at a press conference with other members of the task force.

“As we know so far in this pandemic, younger Americans are less susceptible to serious outcomes of the coronavirus,” Pence, chairman of the task force, said. “The fact that we are finding more young Americans that contracted the coronavirus is a good thing.”

It has been more than a month since the last press briefing by the White House coronavirus task force. And unlike the earlier daily briefings, this one did not occur at the White House but at the Department of Health and Human Services, and President Donald Trump did not participate.

To date, the coronavirus has killed 124,891 Americans, according to Johns Hopkins University, and caused 2.4 million cases of COVID-19 across the nation.

Two other prominent members of the task force made a direct or indirect reference to the nationwide protests of recent weeks, demonstrations largely made up of younger people.

Dr. Deborah Birx, coordinator of the task force, said she was glad more young people generally are getting tested.

“I want to end by thanking the millennials who have come forward,” Birx said, adding:

Dr. Anthony Fauci, director of the National Institute of Allergy and Infectious Diseases, made a personalized case to young people, urging them to remember that although they are less vulnerable they can spread the disease.

Fauci said he remembers “a stage in my life” when he thought: “Well, I’m invulnerable, so I’m going to take a risk.”

“I think what we are missing in this is something that we’ve never faced before,” Fauci said. “A risk for you is not just isolated to you. If you get infected, you are part, innocently or inadvertently, of propagating the dynamic process of a pandemic because the chances are if you get infected, that you are going to infect someone else.”

Fauci referred to young people gathered in large crowds depicted in the media, but didn’t specify whether he was talking about mass protests or big parties.

“The overwhelming majority of people getting infected now are young people, likely the people you will see in the clips and in the paper out in crowds, enjoying themselves,” Fauci said, adding:

“We have announced large investments to support three different vaccine candidates all the way through to manufacturing. These candidates are now in human clinical trials, some with the potential to start delivering safe and effective doses before the end of the year,” Azar said. “We’ll be adding support for several more [vaccine] candidates. We are expanding manufacturing capacity and already making the vials, syringes, and needles we might need.”

Pence took questions on the advisability of campaign rallies, and stressed that “freedom of speech and the right to peaceably assemble is enshrined in the Constitution of the United States.”

Pence said he doesn’t think the spike in COVID-19 cases was a result of states such as Texas and Florida that reopened more aggressively than others.

“There will be a temptation for people to look at these Sunbelt states that have been reopening and putting people back to work and suggesting the reopening has something to do with what we’re seeing in the last week or so,” the vice president said, adding:

Frankly, in the case of each of these states, they reopened in some cases almost two months ago. And, their new cases from testing was low. Their positivity rate was low. What we’re observing today—I’ve heard this from Florida, I’ve heard this from Texas and some other states along the Sunbelt—is that we’re seeing more and more under the age of 35 who are testing positive.