Why One State Wants to Ban Powdered Alcohol 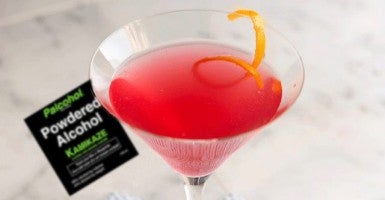 A measure that would ban crystalline, or powdered alcohol, is a step closer to becoming law in Ohio.

House Bill 594 was reported out of committee passed by the House this week. The bill now goes to the Ohio Senate.

The bill would prohibit the sale of crystalline alcohol. It was sponsored by state Reps. Ron Gerberry, D-Austintown, and Jim Buchy, R-Greenville, who claimed the substance was easy to abuse.

“The public health risk of powdered alcohol is too great for our state to ignore,” Buchy said in a press release announcing the bill. “We have to do our part in putting forth reasonable laws that protect our children and prevent the availability of drug forms that have a higher potential for abuse.”

As previously reported, those concerns mirror those of U.S. Sen. Chuck Schumer, D-N.Y., who asked the Food and Drug Administration to ban it.

In April, the Alcohol and Tobacco Tax and Trade Bureau, which regulates taxing and labeling of alcohol products, approved seven flavors of the commercially produced Palcohol. The agency then temporarily rescinded those approvals because of a technical issue with the package fill levels. Palcohol made some changes and resubmitted the labels for approval.

According to the product website, founder Mark Phillips does a lot of camping, hiking and biking, but he didn’t want to lug around heavy bottles of alcohol.

“Wouldn’t it be great to have alcohol in powder form so all one had to do is add water?” he asked.

There wasn’t anything like that on the market, so Phillips invented it. He is not granting any media interviews while his product is awaiting federal approval.

Despite being the only product affected by the bill, no one from Lipsmark, the maker of Palcohol, was asked to testify during the House committee hearings.

Rep. Mike Dovilla, R-Berea, the chairman of the committee, didn’t return phone calls asking about the lack of opponent testimony.

Because of an editing error, earlier versions of this story said the Alcohol and Tobacco Tax and Trade Bureau is an Ohio agency. It is a federal agency.

Maggie Thurber is a reporter for Watchdog.org, a national network of investigative reporters covering waste, fraud and abuse in government. Watchdog.org is a project of the nonprofit Franklin Center for Government & Public Integrity.