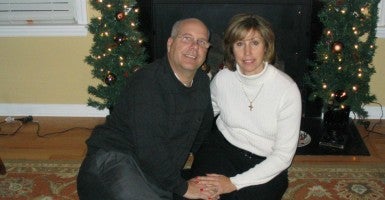 On the morning of Sept. 25, 2014, Tom Bednar was sitting in the bedroom of the Raleigh, N.C., home he shared with his wife, Marla, and two sons when Marla entered the room crying.

She had just looked at the bank account for their three-decade old business, Marla Enterprises, to find it empty. Now, Capital Bank was requesting close to $18,000 to cover the outstanding checks the couple had written.

After transferring money to straighten out their finances with the bank, the Bednars learned just what had happened with the $115,018.01 they had in their bank account: The United States Secret Service seized the money.

“We got no warning,” Tom Bednar said in an interview with The Daily Signal. “Nothing.”

After months of litigation against the United States government, Assistant U.S. Attorney Stephen West moved to dismiss the case earlier this month, meaning the Bednars will get their money back.

However, the government refused to cover the Bednars’ $25,000 in legal fees, which the couple is entitled to under the Civil Asset Forfeiture Reform Act. Though the fight to get their $115,000 back is now over, the family is continuing to push to have their expenses covered.

‘Running Afoul’ of the Law

Tom and Marla Bednar opened Marla Enterprises when they were living in Albany, N.Y. The business buys and sells precious metals, gold, coins and antiques, and operates on a mostly cash basis, Bednar told The Daily Signal.

According to a warrant filed by Special Agent Terry Tate of the U.S. Secret Service, who worked in the agency’s Raleigh, N.C., office, the Bednars had committed structuring violations by withdrawing just under $10,000 in cash from their account on 28 different occasions between Jan. 6, 2014 and May 29, 2014.

In the affidavit, Tate alleged that several other banks had warned Bednar that such withdrawals were in violation of structuring laws and went on to terminate services with the couple. But, Bednar counters that he never received those warnings.

“No one ever warned that it could be suspicious to withdraw under $10,000,” he said.

Bednar contended that he had always been told not to deposit or withdraw more than $10,000 because insurance policies rarely cover more than that amount. Additionally, because many of Marla Enterprises’ customers deal in cash, it was normal for the couple to deposit and withdraw cash frequently.

Under the Bank Secrecy Act, banks must report deposits or withdrawals of more than $10,000 to the Treasury Department. Depositing or withdrawing money under $10,000 to avoid those reporting requirements, though, is known as structuring—a felony.

Structuring violations are covered under a subset of civil asset forfeiture laws that regulate cash deposits. Under this section, government agencies have the power to seize money if it’s suspected of being related to a crime.

In many cases where money is seized by the government for structuring violations, it’s the Internal Revenue Service overseeing the seizure. However, other agencies within the government, such as the Secret Service, enforce structuring laws, Robert Johnson, a lawyer at the Institute for Justice, told The Daily Signal. In addition to the Secret Service, the Postal Inspection Service has pursued structuring cases, he said. But in the Bednars’ case, it’s likely the Secret Service was involved because of the agency’s authority over coins and currency. Marla Enterprises, the Bednars’ business, likely fell under their jurisdiction, Johnson said.

A spokesman for the Secret Service told The Daily Signal the agency couldn’t comment on the case because it’s still an open investigation.

In addition to filing reports with the Department of the Treasury for transactions of more than $10,000, banks are also required to file “suspicious activity reports” for out-of-the-ordinary transactions below that threshold. Customers, though, cannot be informed such reports are filed to the government.

“If I don’t know that I might be running afoul of the law, the only way to know is to be aware of it,” Bednar said.

Both structuring laws and civil asset forfeiture were implemented to curb money laundering and drug trafficking. However, law enforcement agencies have been abusing the tool through what has become known as “policing for profit.”

In many civil asset forfeiture cases, victims are never charged with a crime. Instead, property owners can go to court if they want to get their items back. Experts argue the practice flips the presumption of innocence on its head, as property owners often undergo months of litigation to prove the property isn’t related to a crime—and that’s if they fight back at all. In other cases, the government offers settlements—oftentimes 50 percent of their money back—to victims. Victims often choose to settle so they can avoid years of litigation and lawyers fees.

The Bednars decided to fight the government to get their money back in court after Stephen West, assistant United States attorney, filed a complaint for forfeiture with the United States District Court for the Eastern District of North Carolina.

“I’ve been brought up in the old school,” Bednar said. “I’m very religious—very Catholic. I know right from wrong. I know that this is as wrong as things can get in this part of the world.”

West, who oversaw the forfeiture case of another North Carolina man, Lyndon McLellan, offered the Bednars 50 percent of their money back in March, but they declined the settlement.

In April, he offered the couple all of their money back except for $10,000, which they declined, too.

“My wife and I have run a business our whole lives,” Bednar said. “It’s hard-earned, legitimate money. Why should I give it up and let it be stolen from us, whether it’s $1 or $100?”

Never Charged With a Crime

Months before the Secret Service seized the Bednars’ money, the Raleigh Police Department arrested the couple for operating their business without a permit. The charges were ultimately dropped in November—two months after the law enforcement officials took the $115,000 from Marla Enterprises’ bank account.

In documents filed with the District Court for the Eastern District of North Carolina, West and U.S. Attorney Thomas Walker admitted that neither Marla nor Tom Bednar were charged with crimes related to the money the Secret Service seized.

Additionally, West and Walker also admitted that in the course of their investigation, they found no proof that the property “included proceeds from illegal activity.”

Requests for Admission from Kirkland and Ellis by The Heritage Foundation

“On the face of the government’s complaint, the only criminal activity that was suspected was structuring,” Danielle Sassoon, a lawyer for Kirkland and Ellis who represented the Bednars, told The Daily Signal. “But the Bednars were never charged with that crime and the government admitted in response to requests for admission that the money seized was not the proceeds of any illegal activity, as far as they knew.”

The ‘Truth of the Court’

Not long after the Secret Service seized the Bednars’ money, the Internal Revenue Service changed its policy surrounding structuring cases—as a number of cases involving Americans who unknowingly committed structuring violations came to light. The agency stated it would only pursue such cases if the money was tied to a crime.

Though the change occurred after the Bednars’ money was seized, West filed a motion to dismiss their case—returning all $115,018 seized.

Motion to Dismiss in Bednar Forfeiture Case by The Heritage Foundation

West cited the Justice Department’s change regarding the pursuit of structuring cases as reason for dismissing the case, and further stated that “there is no probable cause that the funds structured were generated from unlawful activity.”

“They should reimburse the Bednars for the thousands spent defending against this meritless case that was ultimately dropped,” she said.

For his part, Tom Bednar is happy he’ll get his money back. But Bednar does wish he and his wife had the opportunity to fight for justice.

“I was disappointed when they dismissed the case,” he said, “because I was looking for my day of justice in the truth of the court. They denied me that.”