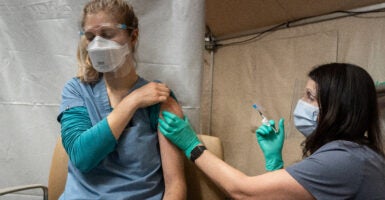 When the Centers for Disease Control and Prevention released updated guidance three weeks ago advising that fully vaccinated people could largely resume normal activities without masking, many saw it as the light at the end of the long tunnel of the COVID-19 pandemic.

However, the CDC’s May 13 guidance is just that and, thanks to power-hungry politicians in no hurry to relinquish their emergency powers, businesses and residents of some states unfortunately might have to wait longer than most to return to something resembling normalcy.

In Oregon, Gov. Kate Brown’s administration managed to incorporate all three of the pandemic’s major controversies—masking, lockdowns, and vaccines—into its response to the updated CDC guidance.

On May 18, the Oregon Health Authority announced that “businesses, employers, and faith institutions” could admit fully vaccinated, unmasked persons—but only if they first ask for and inspect “each individual’s proof of vaccination prior to entry or admission.”

The announcement touched off a firestorm against the prospect of “vaccine passports.”

In a letter to Brown, a Democrat, Oregon House Minority Leader Christine Drazan, a Republican, argued that the Oregon Health Authority policy “will create conflict between employees and customers, and between businesses and the communities they serve.”

A popular theme park south of the state capital learned that the hard way.

Enchanted Forest, which has struggled to weather the prolonged shutdowns, had planned to reopen Memorial Day weekend and permit patrons to go unmasked upon proof of vaccination, but quickly canceled its reopening plans after facing fierce backlash on social media.

Even labor unions, historically among Brown’s biggest backers, blasted the state’s new rules. A spokesman for United Food and Commercial Workers Local 555 stated the Oregon Health Authority’s regulations “[t]elling essential employees to be the mask police and asking customers for their medical information puts them in harm’s way and is insulting … .”

But despite the uproar, early signs indicate that most Oregon businesses plan to steer clear of the controversy by simply continuing existing, universal masking requirements.

Small mom and pop establishments and large retail chains alike have announced plans to continue requiring mask-wearing across the board, rather than deal with the hassle of screening for vaccination, which the head of the Greater Salem Area Chamber of Commerce, Tom Hoffert, described as “petrifying for business.”

And according to Jason Brandt, CEO of the Oregon Restaurant and Lodging Association, many of his members “are keeping with face coverings from the entry point to the point at which [customers] are either sitting at a table or entering their hotel room.”

As such, the practical effect of the Oregon Health Authority’s new guidance is simply a continuation of near-universal indoor mask-wearing despite the CDC’s determination that that’s no longer necessary for vaccinated individuals.

In sum, Brown’s administration has rejected the science of vaccine efficacy recognized by the CDC. As a result, Oregon businesses have had to endure another round of interpretation of, and adaptation to, ever-changing and often nonsensical directives from public health officials, while unvaccinated and privacy-attuned Oregonians have been whipped into a furor over the possibility of vaccine passports, and the nearly 1.7 million fully vaccinated Oregonians will have to continue indefinitely participating in unnecessary mask-wearing theater.

It’s little wonder that half of the state is trying to secede to Idaho.