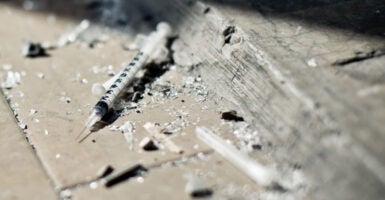 Roughly 60% of Oregonian voters favored making it no longer a crime to possess a “non-commercial” amount of methamphetamine, heroin, and cocaine. (Photo: sanjeri/Getty Images)

Roughly 60% of Oregonian voters favored making it no longer a crime to possess a “non-commercial” amount of methamphetamine, heroin, and cocaine, among others, according to The Hill.

Those caught with the specified amount of narcotics face a $100 fine, but the penalty can be avoided by undergoing a health assessment, The Hill reported.

“Oregon made history tonight by becoming the first state to decriminalize drug possession!” the Drug Policy Alliance tweeted Tuesday. “Our c4 @DrugPolicyAct led this campaign with @voteYESon110 to make this visionary initiative a reality!”

“This victory is truly transformative,” the advocacy group continued.

Both New Jersey and Arizona voted to decriminalize marijuana, and Washington, D.C., made hallucinogenic mushrooms legal in 2020 ballot measures, according to The Hill.

Democratic presidential nominee Joe Biden won the state of Oregon, according to both The Associated Press and The New York Times.