Oregon Capitol Staff to Get Pay Raise for COVID-19 ‘Inconvenience’ 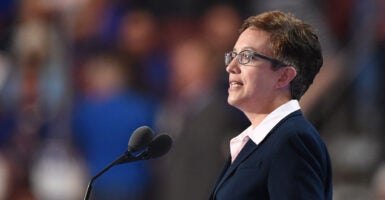 Mike Nearman is a state representative of Oregon and a senior fellow of the Freedom Foundation.

That budget should prioritize helping Oregon families and businesses safely resume their livelihoods, their educations, and their well-being, while recognizing the need to pare back on unnecessary government expenses to free up resources to address the COVID-19 pandemic.

Instead, it proposes using taxpayer resources to compensate select government employees who’ve had the luxury of working from home during the pandemic.

A memo from leaders Courtney and Kotek informed each lawmaker they could expect a 10% increase for the 2021 session, and legislative staffers will receive a monthly stipend to help offset potential costs and other inconveniences that come with needing to work from home.

These inconveniences presumably include spending less on gasoline and other travel expenses during their non-commute.

Working from home has saved most Americans hundreds of dollars in gasoline, reduced their food costs, and freed up countless hours of commutes. It’s hard to understand how savings for ordinary Americans are considered hardships that need to be remedied by more taxpayer dollars for government workers.

While additional income is undoubtedly welcomed by those on the receiving end, to Oregonians still waiting on unemployment benefits during their government-imposed hiatus from work, the increase seems incredibly tone deaf.

Add government pay raises to the ever-growing list of examples showcasing how those in the private sector have been forced to bear the brunt of the economic impacts of the pandemic while government employees, who have never had to miss a paycheck—and who enjoy an estimated 13% compensation premium compared to their private sector counterparts—get to decide whose livelihoods are essential enough to survive.

Oregon Gov. Kate Brown released her own budget recommendations for the next biennium, which include $190 million in salary increases and benefits for Oregon’s public employees.

In the private sector, a CEO that wants to raise salaries has to find a way to cut other costs or increase productivity. Not so in government, where politicians who vote to raise public employee salaries are rewarded with the support and campaign contributions of public employee unions.

It’s easy for politicians who have never worked in the private sector and have no fear of losing their livelihoods due to arbitrary, politically motivated, and unconstitutional sanctions imposed on them to overlook that distinction.

Meanwhile, 10,000 American restaurants—nearly 17%—permanently closed in 2020. More than one-third of Oregon restaurant owners say they could close in the next six months, and Brown wants to fine and jail business owners who are fighting to stay afloat.

What is the point of fining a business in danger of economic failure, beyond malicious punishment, for refusing to obey government officials drunk with power?

It’s bad enough that taxpayers aren’t getting a reprieve from their tax bills while suffering a government-imposed economic shutdown. It is a thumb in the eye of those taxpayers when the people who take their money expect to enrich themselves in the process.

Americans and their businesses are suffering as a result of mandated shutdowns all over the country. Yet liberal politicians continue to spend taxpayer money that may soon cease to exist.

Those politicians need to realize soon that the taxes that were previously generated from the businesses they shut down are not going to magically reappear.

Rather than pretending their edicts have no cost, our “leaders” in government should be cutting their own spending across the board in order to help the businesses and people who have suffered as a result of their arbitrary shutdowns.