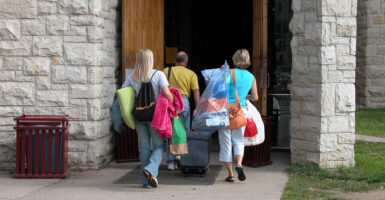 Biological men who "identify" as women can live in colleges' female dorm rooms under a new Biden administration directive. A federal judge denied the College of the Ozarks’ request for an injunction and temporary restraining order of the directive. (Photo: ArtBoyMB/Getty Images)

A federal judge has denied a request from the College of the Ozarks to be exempted from a Biden administration directive that allows biological men who “identify” as female to live in women’s dormitories.

Federal Judge Roseann Ketchmark ruled against the Missouri college on Wednesday, saying that the court could not offer a remedy to the school because there was no specific injury. Ketchmark denied the school’s request for an injunction and temporary restraining order as its lawsuit against the Biden administration proceeds.

“While we’re disappointed by the court’s ruling today, we are confident that College of the Ozarks will obtain the relief that it seeks as this case moves forward,” Ryan Bangert, senior counsel with Alliance Defending Freedom, a Christian legal organization representing the Point Lookout, Missouri, college, said in a statement.

The college was seeking relief from a Department of Housing and Urban Development directive that prohibits all entities under the Fair Housing Act, including colleges, from discriminating against an individual “because of sexual orientation and gender identity.”

The HUD directive was announced shortly after President Joe Biden’s January “Executive Order on Preventing and Combating Discrimination on the Basis of Gender Identity or Sexual Orientation.”

The college filed the lawsuit because the HUD directive threatens the school’s “long-standing religious beliefs,” said Valorie Coleman, chief communications officer for the College of the Ozarks, in a statement on behalf of the college’s president after the hearing.

HUD’s “rule change forces religious schools, like ours, to open our dormitories, including dorm rooms and showers, to members of the opposite sex. The Biden administration touts this change as freedom from discrimination, but this does not feel or look like freedom,” the spokeswoman said.

Failing to abide by the Biden administration directive puts the College of the Ozarks at risk of being hit with up to six-figure fines, Coleman said.

The HUD directive threatens the school because it’s a rule change, Alliance Defending Freedom attorney Julie Marie Blake argued before the judge during the hearing. The Biden administration policy fully embraces a new definition of sex to include gender identity and sexual orientation.

Under the new directive, the Fair Housing Act prohibits discrimination on the basis of gender identity and sexual orientation, and forces schools to open women’s dorm rooms to biological males who “identify” as women, Blake argued.

Blake told the judge that even though no complaint has been filed against the school regarding HUD’s directive, “the college need not wait for an actual prosecution or enforcement action before challenging a law’s constitutionality.”

James Luh, the attorney representing HUD, said the directive does not constitute a rule change, arguing that the department has had the same anti-discrimination policies in place for a decade.

Luh also contended that the case did not have standing because there has been no complaint filed against the college regarding HUD’s directive, and there may never be one.

“The plaintiffs can’t establish either irreparable harm or the likelihood of success necessary to sustain a preliminary injunction,” he said.

Following two-and-a-half hours of argument, Ketchmark, a 2014 appointee of President Barack Obama, ruled that the case lacked redressability, meaning that the court could not offer a remedy since the directive had not caused the school injury.

“We have a right to appeal, and we are fully exploring that,” Bangert said in a press conference following the judge’s ruling.

In the press conference, he countered Luh’s argument, saying that “the government’s position is pretty simple: ‘Nothing to see here. This piece of paper that we put out, that the president of the United States called a rule change and celebrated, means nothing.’”

Bangert added that he’s optimistic that the federal appeals courts will “recognize that this is a meaningful rule change, and it imposes real obligations and creates real harm for females at College of the Ozarks, as well as at Christian schools across the nation.”