How a Murky Espionage Act Could Complicate Prosecution of Assange 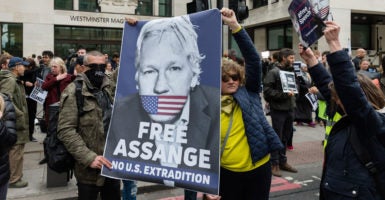 Supporters of Julian Assange block traffic during a protest outside Westminster Magistrates Court where the hearing on the U.S. extradition request of the WikiLeaks founder over conspiracy with Chelsea Manning in obtaining and publishing the Iraq War logs took place on May 2 in London, England. (Photo: WIktor Szymanowicz/NurPhoto/Getty Images)

The curtain rose on Act 1, Scene 2 in the Julian Assange drama on May 23, when the U.S. Department of Justice unsealed a sweeping 18-count superseding indictment against the WikiLeaks founder that includes alleged violations of the Espionage Act—something that might complicate the government’s efforts to bring Assange to justice.

As we wrote when Assange first appeared in a magistrate court in Westminster (London) in early May for his first of many hearings on the U.S. extradition request, he had only been charged with a single felony that carried a maximum of five years imprisonment if convicted.

The narrow indictment only charged him with conspiring with convicted felon Bradley (now Chelsea) Manning to commit computer intrusion.  If that had been the only charge at trial, it would have likely foreclosed any defenses related to Assange’s claim that WikiLeaks is a media outlet and that he was entitled to protections under the First Amendment.

In its press release accompanying the new indictment, senior Justice Department officials stressed that one of the department’s “top priorities is to prosecute, and therefore deter, unauthorized disclosures of classified information.”

The indictment also charges Assange for his posting of a narrow subset of classified documents on WikiLeaks that allegedly identified the names of human sources—including local Afghans and Iraqis who were assisting U.S. forces in theater, and those of journalists, religious leaders, human rights advocates, and political dissidents living in repressive regimes.

Assange thereby is alleged to have created grave and imminent risk to their lives and liberty.

Those alleged actions disclosed our sensitive, classified information in a manner that made it available to every terrorist group, hostile foreign intelligence service, and opposing military.

Documents relating to these disclosures were even found in the compound of Osama bin Laden. That release made our adversaries stronger and more knowledgeable—and the United States less secure.

Demers went on to say that Assange is “no journalist” because no “responsible actor—journalist or otherwise—would purposely publish the names of individuals he or she knew to be confidential human sources in war zones, exposing them to the gravest of dangers.”

The U.S. attorney in charge of the case stressed that the United States was not charging Assange for “passively obtaining or receiving classified information” or for publishing in “bulk hundreds of thousands of … stolen classified documents.”

Rather, it is charging him with publishing “classified documents” that contained the unredacted names of “innocent people who risked their safety and freedom to provide information to the United States and its allies.”

The fact that the Justice Department says Assange is not a journalist does not preclude Assange from claiming that he is one, should the case go to trial.  Furthermore, the new indictment has already resulted in some claims that the government’s approach threatens press freedoms and will also result in collateral damage.

Yet, very few people are defending what Assange did in putting lives at risk by publishing the names of people who cooperated with the United States in war zones. The central issue is the law itself, the Espionage Act.

The Espionage Act (18 U.S.C. §793(e)) is a World War I-era law that, as we wrote back in 2010, has been, according to law professor Steven I. Vladeck, “marked by profound and frustrating ambiguities and internal inconsistencies.”

Vladeck added that the new indictment “tees up a major test case for the relationship between press freedom and the Constitution,” not because Assange is a journalist or that his conduct should be protected by the Constitution, but rather because of the “theory of criminal liability under the Espionage Act of 1917.”

As I noted 10 years ago in our Heritage paper on the subject:

These ambiguities are problematic for two interrelated reasons. First, as Heritage has argued in another context, vague laws do not give citizens notice of what it is that is prohibited.

Second, vague laws may cause uncertainty in lawful prosecutions of those, like WikiLeaks, who clearly have a malevolent intent, but whose actions may be immunized from prosecution by a lack of clarity in the law.

The Espionage Act’s language is capacious and could be read to criminalize all sorts of lawful activity protected by the First Amendment to the U.S. Constitution. Accordingly, it has been interpreted narrowly to save it from First Amendment attack, but that has made it less effective.

It may be some time before Assange is extradited to the United States to face justice on this new indictment.  On June 3, a Swedish court rejected a claim to detain Assange over an allegation that he raped two women in Sweden, but will allow him to be questioned in England while serving his sentence for bail-jumping.

Sweden may request his extradition after the conclusion of the investigation. And next week, Assange is due in court on our formal extradition request.

So, it will be awhile until Act 2—the prosecution of Assange in the U.S.—begins.