Julian Assange’s Days in the UK Are Numbered 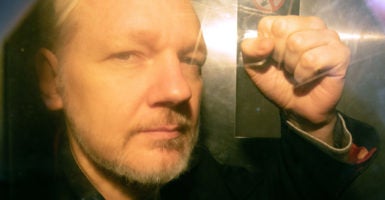 Act 1 of the Julian Assange extradition play opened in London on Monday—not in the city’s theatre district, but in a magistrate court in Westminster.

The founder of WikiLeaks made his first appearance in court on the United States’ extradition request, appearing by video link from his southeast London prison where he is serving a 50-week sentence for bail jumping.

Never one to shy away from the limelight, and always eager to play his self-appointed role of besieged hero-truth detector-journalist, Assange blurted out his lines to the judge when asked if he would voluntarily surrender to the U.S. request, orating, “I do not wish to surrender myself for extradition for doing journalism that has won many, many awards and protected many people.”

So, the show must go on. It looks like Assange will drag out the process as long as he can.

Of course, the U.S. did not indict Assange for being a journalist, but for conspiring with Chelsea Manning to commit computer intrusion, a crime that carries at five-year maximum sentence. And now, since the country of Ecuador has revoked his asylum and booted him from its London embassy, where he lived for the last seven years, the United States, and possibly Sweden, want Assange to answer for criminal charges in their countries.

If he had done so, the United States Marshals Service could then take him into custody and bring him to the United States to face his federal charges. Whether he would have had to serve the remaining 49 or so weeks in British prison would have been a point of discussion between British and American officials.

But Assange chose not to take that route, which is his right.

So, the judge set the next court date for May 30 for a minor procedural matter, and then June 12, by which time the formal paperwork from the United States is supposed to be transmitted to Assange and his legal team.

The U.S. has a substantial interest in extraditing Assange. According to the Justice Department press release that announced the indictment, Assange was involved in “one of the largest compromises of classified information in the history of the United States.”

He allegedly conspired with Manning to assist in cracking “a password stored in U.S. Department of Defense computers connected to the Secret Internet Protocol Network (SIPRNet).” That allowed Manning to “log on to the computers under a username that did not belong to her.”

The process of extradition takes time and is quite complicated. International extraditions are handled by the departments of Justice and State. Title 18 United States Code § 3184 is the governing document when the U.S. has a treaty or convention for extradition with any foreign government.

Since the process takes some time, many treaties allow for the provisional arrest of the fugitive. Here, Assange is already serving time for his bail jumping conviction, so the U.S. may not have requested—at least not yet—a provisional arrest.

The Office of International Affairs in the Department of Justice has the primary responsibility of working with federal prosecutors and the State Department to ensure the extradition and accompanying paperwork is in order and complies with the treaty.

The State Department then makes the formal request for extradition, “supported by all necessary documents, duly certified, authenticated and, if necessary, translated into the language of the country where the fugitive is arrested, within a specified time (from 30 days to three months, depending on the treaty.)”

The request itself is made by diplomatic note “prepared by the Department of State and transmitted to the foreign government through diplomatic channels.”

As the Justice Department’s own website admits, “appeals and delays are common” in international extradition proceedings. The average extradition, according to Jonathan Masters, takes more than a year from request to surrender, and some have taken more than 12 years.

So as we predicted, Assange will be in the news for some time to come.

The longest running play in London is “Mousetrap,” having run for 57 years and counting. Act 1 of the Assange drama has just begun, with no end in sight.

Let’s hope the curtain falls soon and he is extradited to the United States to face justice.