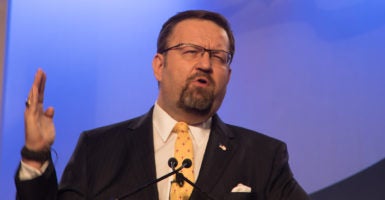 President Donald Trump is defeating terrorism by allowing the military to do its job and by combating extremist ideology, a former adviser to the president said Friday.

“Our troops have been unleashed,” Sebastian Gorka, former deputy assistant to President Donald Trump and counterterrorism adviser, said Friday at The Heritage Foundation.

“I had a tier one operator, meaning a top of the top special operations guy on detail from the National Security Council … come up to me in maybe week five of the administration and say, ‘Sir, you have no idea, no idea how the morale amongst our forces have skyrocketed because we are no longer micromanaged … and we are allowed to do our job, and it is clear the president trusts us,” he said.

The contrast in strategy has made all the difference, Gorka said.

“We have been told by the last administration that ISIS is a generational threat … [that] our children, our grandchildren will be fighting ISIS jihadis decades from now,” Gorka said. “Well, I guess the Trump administration has defined generations to last just a few months.”

While President Barack Obama called ISIS a “J.V. team” in a January 2014 interview in The New Yorker, Gorka said Trump and his administration did what the Obama administration said would take years.

“There is no ISIS caliphate any longer,” Gorka said. “We have liberated Mosul, we have have taken back Raqqa, the operational headquarters of ISIS, and just three weeks ago, the last ISIS stronghold in Syria has fallen as well.”

Trump has been successful, Gorka said, by evaluating threats and responding to threats strategically.

Trump “looked at the threat we faced clearly as a war, not as some problem to be managed, but as a war, and not only that, he wants to win that war, and that is exactly what we have been doing as a nation,” Gorka said.

Trump has also made gains on winning the war on terrorism by acknowledging that there is an ideology behind it.

“Instead of looking at the religious ideology of groups like al-Qaeda and ISIS, the last administration was driven by very, very flawed concepts from social science, specifically social movement theory … [which] would have you believe that all violence of an organized nature is the result of physical and economic issues,” the former presidential adviser said.

An example of this approach can be seen, Gorka said, in the comment made by Obama State Department spokeswoman Marie Harf that providing terrorists with jobs is a solution to defeating ISIS.

“We can help them build their economies so they can have job opportunities for these people,” Harf said in 2015.

This type of approach is not part of Trump’s strategy to end terrorism, Gorka said.

“The political correctness from Day One is gone,” Gorka said. “Why, look at the Riyadh speech … He went to the heart of the Muslim world, the area where Islam was founded, and … what did he say, he said, sort out your societies, he actually said rid your places of worship of the extremists, rid your societies of the terrorists,” Gorka said.

His approach is even being accepted by unlikely recipients, according to Gorka.

“As an Arab woman told me two weeks later, that is the speech we have been waiting for for 16 years,” Gorka said. “No brushing the issues under the carpet, [but] calling out our Muslim friends to start by cleaning out their own front doors, their own backyards.”

Combating terrorist ideology will remain a priority for Trump in the future, according to Gorka.

“Killing terrorists is great, but it is not a metric of victory, because when you have enemies who have a massive recruiting pool, you can kill a jihadi with a drone strike and 20 guys tomorrow will volunteer to replace him,” Gorka said, adding: