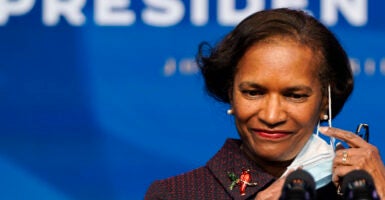 An advisory panel to President Joe Biden is trying to marry the issue of amnesty for illegal immigrants with what it calls “environmental justice,” the federal effort to confront climate change.

The White House Environmental Justice Advisory Council last week released a report with about 90 pages of recommendations, including adopting the language of the left’s Green New Deal and opposing nuclear energy.

But the panel also made recommendations that seem to have at best a tenuous relationship to the environment, tying policies already supported by the Biden administration and Democrats in Congress to environmental protection.

“Lack of immigration status fundamentally limits the ability of immigrants to enforce their rights and have access to programs and services that would promote their food, housing, economic security, and improved environmental quality,” the White House environmental justice report states, citing the situation as a “challenge.”

The report goes on to make two recommendations to meet this challenge.

The first: “The [Biden] administration should leverage its discretion and resources to ensure that undocumented individuals and families are not left out or ineligible to benefit from EJ40 investments.”

Where limitations in servicing undocumented individuals require statutory changes, the administration, at the highest levels, should work aggressively with Congress to secure a path to legalization for undocumented immigrants, as well as other improvements to prevent the exclusion of the undocumented from [Environmental] Justice 40 investments, given that they are predominantly BIPOC.

BIPOC is an acronym for black, Indigenous, and people of color.

Biden already has backed an immigration bill to grant legal status to up to 20 million illegal immigrants.

The recommendations in the report are similar to the Green New Deal proposal in Congress, amounting to a grab bag of left-wing proposals, said Tom Pyle, president of the Institute for Energy Research.

“These proposals do a disservice to the very communities they claim to help,” Pyle told The Daily Signal in a phone interview. “I don’t see how communities in this country are going to benefit from amnesty for illegal immigrants.”

The White House did not respond to an inquiry Thursday for this report with respect to immigration.

President [Joe] Biden and Vice President [Kamala] Harris have made it clear from their first day in office that environmental justice is a top priority, and that the voices of historically disadvantaged communities will be heard in the White House and throughout their administration.

I am immensely grateful to the volunteer members of the White House Environmental Justice Advisory Council for their tireless and swift work to provide the recommendations they are submitting today. I look forward to reviewing these recommendations and to working with my colleagues across the federal government and with Congress to follow through on the president’s commitments to address long-standing environmental injustices, ensure no community gets left behind, and build back better.

Biden administration officials, among them Energy Secretary Jennifer Granholm and White House national climate adviser Gina McCarthy, already have indicated they aren’t likely to consider all of the energy-related suggestions from the report.

The push against nuclear power will be a problem for New Mexico’s economy, said Paul Gessing, president of the Rio Grande Foundation, a free market think tank in New Mexico.

“I would point to the title of the panel, ‘Environmental Justice.’ When you convene something with the word ‘justice’ in it, that becomes the ultimate focus,” Gessing told The Daily Signal in a phone interview. “Justice means different things to different people. But once a panel goes down a ‘justice’ rabbit hole, it can create a lot of policies that have nothing to do with the [modifier], in this case environmental.”

As The Daily Signal previously reported, many of the members of the White House Environmental Justice Advisory Council have radical activist backgrounds and have compared energy development with racism and slavery.

On another front that seemed tenuously related to environmental issues, the council called for expanding Medicaid to more “birthing people” and expanding Medicare for “lifetime access” for “frontline communities.”

The other related recommendation says: “Extend Medicaid coverage for a year for ALL mothers and child-birthing people with inclusion of body burden & risk factors associated with climate issues: extreme heat, air pollution, lead-poisoned water, and other environmentally induced health conditions.”

Packaging unrelated matters together is not unusual for Democratic lawmakers, said Pyle, of the Institute for Energy Research.

“It’s not odd if that’s how you govern, through community organizing and trying to enlist groups to direct money to constituencies they think will help them get elected,” Pyle said, adding: “The Green New Deal is just putting a green coat of paint on progressive policies.”