‘Medicare for All’ Is Still a Threat 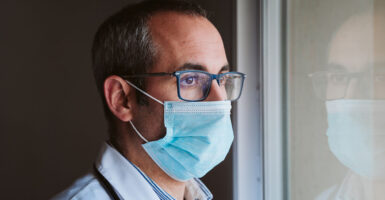 Rather than fully embracing a single-payer model, "Medicare for All" hides itself behind expanding Obamacare and adding to it a new government plan. (Photo: Eva Blanco/EyeE/Getty Images)

Noticeably absent from the Democrats’ latest policy platform: any mention of “Medicare for All.” But don’t be fooled. Efforts to push government-run health care are still a real threat.

Rather than fully and openly embracing a single-payer model, this new approach hides itself behind expanding Obamacare and adding to it a new government plan—the so-called public option.

However, more government involvement in health care is still the problem.

Take Obamacare. It has led to higher cost and less choice. Premiums more than doubled—with a 125% increase in the cost of health insurance—from 2013 to 2018.

In 2013, the year before Obamacare took effect, the average monthly premium for coverage in the individual market was $244 per month. By 2018, the cost was $550 per month.

Higher costs and fewer options have driven many middle-class families out of the insurance market altogether. Census data show that the number of uninsured increased from 2017 to 2018.

Many individuals who qualify for assistance remain uninsured, and data from the Centers for Medicare and Medicaid Services show that from 2016 to 2018, enrollment in Obamacare among middle-class families who are not subsidized dropped by 40%.

As Centers for Medicare and Medicaid Services Administrator Seema Verma notes, “As usual, critics of President Trump have been quick to blame the Administration’s healthcare policies for this increase. But a review of key facts suggests the rising uninsured rate stems largely from Obamacare’s failure to deliver affordable health insurance premiums and has created a new class of uninsured.”

Reluctantly, the left has acknowledged that Obamacare has fallen short of cost and coverage expectations.

Yet its solution is more of the same: Spend more taxpayer money on subsidies to insurance companies to cover up the cost increases and set up another government program—the public option—to cover up the lack of coverage options.

Both solutions double down on a government-run model that fails to recognize that more government is the problem, not the answer.

Increasing insurers’ access to subsidies would mean big spending with little meaningful impact. As Doug Badger, a former presidential appointee on the National Economic Council, points out: “Although federal expenditures have increased and are projected to continue to increase in the future, the number of people benefiting from subsidies has been declining for three years.

The Congressional Budget Office projects that both trends will persist over the next decade, with the number of subsidized beneficiaries dropping by roughly one-fourth, while annual spending on federal subsidies rises by more than one-third.

Under the public option scheme, the government plan—with its regulatory power—would set its prices below its private-market competitors.

The effect of both these policy prescriptions advances the Medicare for All agenda: spend more taxpayer money, eliminate all private coverage, and replace it with one government-run health plan.