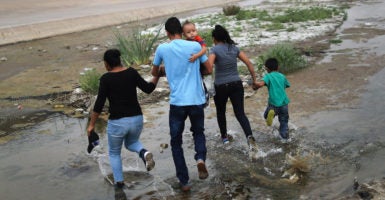 Migrants hold hands as they cross the border between the U.S. and Mexico at the Rio Grande River on their way to enter El Paso, Texas, May 20, 2019. (Photo: Mario Tama/Getty Images)

Immigration and Customs Enforcement and Customs and Border Protection in the El Paso area have identified 238 fraudulent families, 50 adults falsely claiming to be minors, and have seized hundreds of documents attempting to support these migrants’ claims, according to an ICE statement released Thursday.

ICE’s Homeland Security Investigations, in conjunction with CBP and Border Patrol officials, in April launched the Family Fraud Initiative in El Paso with the goal of identifying “individuals fraudulently presenting themselves as families when making an asylum claim in order to be released into the United States.”

The program identified an enormous amount of fraud by illegal migrants seemingly hoping to take advantage of U.S. immigration laws, and ultimately resulted in more than 350 people being federal prosecuted for making false statements, human smuggling, illegal reentry into the U.S. after being deported, conspiracy, and other crimes.

The Family Fraud Initiative also identified a massive child smuggling operation run by transnational criminal organizations. Investigations indicate these criminal organizations entered into agreements with biological parents, who allow their children to be handed over to unrelated adults so they can falsely pose as a family unit to American officials. Ages of the children have ranged from 16 years to as young as 4 months.

“These children are being dangerously used as pawns by criminals to take advantage of loopholes in our immigration laws and avoid being detained by U.S. immigration authorities,” said Jack P. Staton, special agent in charge of HSI El Paso. “HSI and Border Patrol will continue to protect children from being smuggled, as well as aggressively target, identify, and stop criminal organizations from generating false documents and exploiting innocent children.”

ICE and Border Patrol have so far transferred 19 children to Health and Human Services, removing them from such dangerous activity.

Leaders within the Department of Homeland Security have long argued that the country’s immigration laws create an incentive for foreign nationals to try and emigrate to the U.S. as a family unit. Since families with children cannot be detained for longer than 20 days, migrant adults benefit if they bring a related minor with them. If they do so, they believe they will likely be released into the interior of the U.S. before their asylum claims can be adjudicated.

Communities across Central America are aware of this loophole. In fact, numerous migrants who have reached the U.S.-Mexico border say they’ve been explicitly told to bring a child with them if they want to make it past border enforcement. For many migrants, that means trying to pass off an unrelated child as one of their own.