What Christmas Means to My Immigrant Family 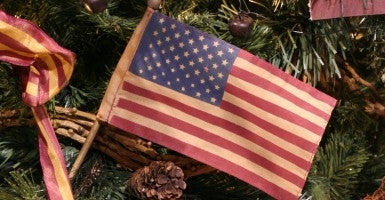 I’m not much of a sentimental guy, but I have to admit I get pretty sentimental at Christmas. It is a special time in my family, not least because of eventful Christmases that my parents, who are no longer with us, experienced in their lives.

I’ve written about those Christmases on previous occasions, such as Christmas 1919, when my father, a White Russian officer, escaped the Bolsheviks at the end of the Russian Civil War by skiing hundreds of miles through the dark, cold woods of northern Russia past Communist patrols to Finland and freedom.

If he had been captured, he would have been shot, and neither I nor my two brothers and two sisters, nor my father’s 14 grandchildren and four great-grandchildren would be here today.

My German mother, her sisters, my grandmother, and my great-grandparents barely escaped freezing to death during a starving Christmas in 1944, when many of the civilians who lived in Breslau, Germany, tried to get out of the city in advance of Russian troops during one of the coldest winters on record.

>>> Watch: Here’s What Christmas Means to These Americans

When the thaw came the following spring, the corpses of 90,000 men, women, and children who had frozen to death were found in ditches along the roads leading out of Breslau. Fortunately, my mother’s family had stayed in Breslau, although they then barely survived the siege by Russian troops, whose raping and pillaging rivaled the brutality of a 13th-century Mongol horde.

My parents met in a refugee camp in the American-occupied sector of Germany. My mother and her whole family had escaped to the west after all Germans were ordered out of Breslau in 1946 when the Allies handed that part of Silesia over to Poland. Though my mother’s family had left separately in small groups, they were able to find each other again and lived together in the camp.

My father ended up in the same camp after he fled Yugoslavia to once again avoid being shot. Like many White Russians, he had settled in Slovenia after he got out of Russia. But when Tito and the Communists started consolidating their control of Yugoslavia after the war, their efforts included rounding up, imprisoning, and executing anyone they thought might resist them.

My father received a telephone call from a friend telling him that his name was on a list, and he needed to get out. So he packed a bag and walked out the front door of his home, abandoning everything he owned and heading on foot for the one place in Europe where he knew he would be safest from reprisal by the Communists, whether Yugoslav or Russian: wherever there were American troops.

My parents emigrated to America in 1951, seeking a better life for their children and a safe place for them to grow up. They arrived literally almost without a penny and spent their first Christmas in America with my three-year-old sister and my eight-month-old brother in the attic rooms of a wonderful Chicago family who were members of the church that had sponsored their immigration.

My family didn’t have it easy — my father had been a tenured college professor in Europe, but the only job he could find in Chicago was working in a factory. He did that for seven years until he landed a teaching job at a small college in Jacksonville, Ala. My mother had to learn English before she could get her first job, as a cashier in a department store.

We never had a lot of money as we were growing up, but we children never noticed it because we had a great family life. My mother’s mother, who immigrated here in 1953, took care of us at home while my father and mother worked. And Christmas was always special because my family laid German and Russian Christmas traditions onto American ones. For example, we celebrated Christmas Eve as the time for giving presents, rather than Christmas morning. My mother made traditional German cookies and pastries, and we had candles on the tree, very carefully lit, for a short time on Christmas Eve.

And every December, a big box would arrive from Germany, from my mother’s sisters. It would be full of presents and German chocolates and marzipan, including chocolate tree ornaments that we got to take off the tree and eat on Christmas Eve. There was always one special package in the box for my parents — dark chocolates filled with German brandy. When I finally got to eat one the Christmas after my 18th birthday, I realized those were the best chocolates I’d ever had.

My siblings and I have married spouses from all different parts of the United States, and we have incorporated their traditions into our own. We still have a traditional German Christmas Eve dinner, but my Italian brother-in-law added Italian sausages to our traditional bratwurst and whitefish. My family is visited by both the Christkind and Santa Claus; my sister’s Southern husband makes a killer barbecued roast for Christmas dinner. The children of my oldest sister (who was born in the refugee camp) would perform “A Visit from St. Nicholas” by Clement Clarke Moore for the whole family.

My parents’ five children have all achieved a portion of the American dream in one way or another. My family’s story is a typical immigrant family’s story — and I’m always reminded of that as we celebrate Christmas with our families, remembering the past Christmases that my parents celebrated and, most important, survived. Every Christmas, I feel surrounded by the ghosts of my family’s Christmases past.

I don’t much like the way some people in Washington, such as Barack Obama, are trying to change for the worse this country that gave my family sanctuary, and I don’t like the way they are slowly destroying the very fabric of the American experiment.

But at Christmas we celebrate a holiday that is about the birth of hope and salvation. America is a nation where we believe in liberty and freedom, and for more than 200 years it has generously welcomed those who were fleeing tyranny, oppression, and darkness. And it has given them a chance to prosper and enjoy life, liberty, and the pursuit of happiness. Especially at Christmas, I remain hopeful that the America we love will endure.

So my family and I wish all of you a merry Christmas and a happy new year! And may God continue to bless this great nation that we all call home.

Originally appeared in National Review in 2013.