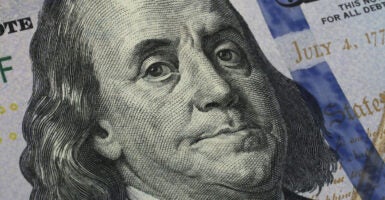 Despite claims by the Biden administration, nondefense federal spending is rapidly growing, while spending on national defense is getting shortchanged. (Photo: Douglas Sacha/Getty Images)

If you listen to the narrative being promoted by President Joe Biden and his allies on the left, it would be easy to think that the federal government spends more than enough on the military and little on nondefense social programs.

Yet the reality is exactly the opposite. The federal government has become home to an ever-expanding assortment of benefit and subsidy programs (and bureaucrats to administer them), while shortchanging constitutional priorities such as national security.

The growth of the federal budget and the debt has been driven by an unsustainable growth in nondefense spending.

These charts illustrate how we got here and the long-term consequences to our nation’s financial health.

The 1960s were a key inflection point for federal priorities.

Since the 1960s, nondefense spending has risen significantly and steadily in inflation-adjusted terms, driven by the growth of entitlement programs. Even before the massive spike in spending during the pandemic, nondefense spending was nine times higher in 2019 than it was in 1965, and more than five times as much on a per-person basis.

Meanwhile, the level of inflation-adjusted defense spending has remained relatively consistent. Defense spending began trending downwards once the U.S. began its withdrawal from Vietnam. President Ronald Reagan’s commitment to bolstering the armed services reversed the downward trend during the 1980s, but the decline returned following the end of the Cold War.

After 9/11, defense spending has seen a gradual increase in real terms.

Biden’s big government agenda seeks to retain as much of the sky-high 2020 spending level as possible by massively expanding the federal government.

Unfortunately, America faces a serious financial reckoning even if Congress rejects Biden’s spending increase proposals. That’s because most federal spending is already on autopilot, growing year after year based on benefit formulas.

By 2036, every penny of tax revenue will be needed just to pay for Social Security, Medicare, Medicaid, and interest on the debt. Amazingly, this chart assumes that Congress would allow much of the 2017 tax cuts to expire, meaning that spending in these categories would outpace revenue even after a tax hike.

Health care is already the largest federal spending category. Amazingly, federal health spending is projected to more than double between 2019 and 2031 despite low expected levels of inflation and population growth.

The single most important thing Congress can do to prevent this from happening is to reform Medicare in a way that gives more choices and lower costs for beneficiaries and slows the growth of spending, which would help keep the program from going bankrupt (or bankrupting the country).

The unsustainable growth of nondefense spending is the driving force behind outsized budget gaps. While tax revenue is expected to remain around its historical average, spending (driven by benefit programs) will surge far above normal levels.

Some on the left claim that we shouldn’t be concerned about the national debt since interest rates are so low.

The problem with this line of thinking is that with $28 trillion in debt on the books today (over $210,000 per U.S. household), and trillions more being added every year, even a small bump in interest rates would cause economic distress. We should not put the nation’s future at risk by assuming an infinite supply of cheap credit.

The Highway Trust Fund is a perfect example of Washington’s dysfunction. While gas tax revenue provides more than enough money to cover core federal priorities, lawmakers have intentionally spent more than what the tax brings in, causing a deficit in the Highway Trust Fund and requiring a series of bailouts.

Unfortunately, big spenders are eyeing a new tax on vehicle miles traveled to boost revenue. While they claim this hike is necessary to fund key infrastructure, the reality is that billions of dollars are wasted every year on excessive compensation for government workers and counterproductive federal regulations.

Juicing the trust fund with more tax dollars would help maintain the spending, but it would also enable legislators to keep ignoring the need for serious reforms. Americans would be better off if the federal government got out of the way and allowed state governments and the private sector to do the important work faster and cheaper.

A common thread linking these six charts is the relentless growth of federal spending, driven both by congressional failure to reform unsustainable programs and by political incentives to create new ones.

Unfortunately, Biden wants to make these problems worse by adding trillions more to nondefense spending, adding to the national debt, and hiking taxes in a way that would put us on a path to national decline.

It is vital that Congress wakes up to reality and puts us back on a path to solvency.