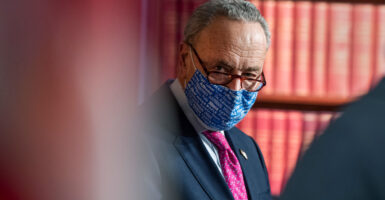 The combination of unified control of the federal government along with the COVID-19 pandemic has seemingly caused some elected officials to think there are no consequences to new spending proposals. However, they must wake up to the dangers posed by recklessly adding to the national debt.

On Thursday, Majority Leader Charles Schumer, D-N.Y., exemplified this mindset by saying, “The dangers of undershooting our response are far greater than overshooting it. We should have learned the lesson, from 2008 and 2009, when Congress was too timid and constrained in its response to the global financial crisis.”

This is wrong on several fronts.

First, the stimulus spending that took place in the wake of the Great Recession was ineffective at creating jobs, and in some ways slowed the economy by creating perverse incentives and crowding out private activity.

Second, despite the difficulties associated with the pandemic, the economy is currently in much better shape than it was during the last recession.

Third, Congress has already approved over $4 trillion in response to the pandemic, much of which is still available or in the process of being distributed. The idea that Congress has been “undershooting” the response is ridiculous.

Most importantly, Schumer and other leftists in Congress are ignoring the very real danger posed by adding to the $27.8 trillion federal debt, which is over $210,000 for every U.S. household.

Even after the pandemic is over and the economy returns to normal, we will face serious problems as a result of the federal government’s broken finances.

Over $21 trillion worth of federal debt obligations are traded on the open market. While interest rates are low today, Congress has no control over what those rates will be as the debt turns over and requires refinancing.

Credit rating agencies are growing concerned about the sustainability of America’s finances. If demand for our debt goes down, that will force the Treasury to offer higher interest rates.

Higher interest rates on so much debt would add up very quickly, which makes this a serious risk to economic growth and future prosperity. That means we need to put an end to massive deficits and eventually shrink the debt, either in absolute terms or in relation to the size of the economy, to reduce the risk to current and future generations.

This will be impossible unless legislators address the driving force behind long-term debt and deficits: unsustainable benefit programs such as Social Security and Medicare.

Major trust funds will run dry all too soon. Medicare Part A (hospital insurance) goes broke in 2024, Social Security Disability Insurance in 2026, and the Social Security retirement fund in 2031. These are programs that tens of millions of people rely on, and trust fund insolvency would cause serious upheaval, especially for Social Security.

Annual deficits for the federal government and these major benefit programs are too large to close overnight. Deficits were already high during the years of strong economic growth prior to the pandemic, and then exploded in 2020.

Reforms aiming to slow the growth of spending on Social Security and Medicare can have a significant effect, but only if those reforms are in place several years before the trust funds run out. The longer we wait, the more drastic the necessary changes become.

Besides reforming large benefit programs, there are many other ways for Congress to improve the nation’s financial health. These include refocusing the federal government on core priorities, eliminating wasteful spending, returning to a regular budget process, and strengthening economic growth.

What would not help this massive and growing problem is spending trillions of dollars we don’t have on more “relief” legislation that would do little to help the economy. Hopefully Congress will come to its senses and recognize that it has a responsibility to use taxpayer dollars wisely.