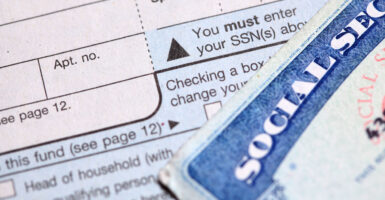 A new report from the Congressional Budget Office estimates that the federal deficit will reach $3.3 trillion in 2020. It would be nearly impossible to tackle America’s debt without addressing entitlement programs like Medicare and Social Security. (Photo: Kameleon007/Getty Images)

The Congressional Budget Office released an update to its federal budget projections—the first full update to include effects from COVID-19. While the federal government’s finances were already grim in January despite several years of solid economic growth, this updated report details how things have gone from bad to worse.

First, the deficit for 2020 is expected to reach $3.3 trillion, or over $25,000 per household. As a share of the economy, this deficit is the largest since World War II.

This massive deficit is a combination of preexisting structural deficits (the Congressional Budget Office projected a $1.1 trillion deficit for 2020 in early March), the increase in spending related to COVID-19 ($1.9 trillion), and a decline in revenues ($337 billion).

The $3.3 trillion deficit figure does not include the potential of an additional COVID-19 relief package, which would likely add another $1 trillion or more.

Second, the combined deficits for 2021 through 2030 are projected at just under $13 trillion. Considering that the current gross debt is $26.7 trillion, the per-household share would stand at about $275,000 just 10 years from now.

Third, several major trust funds are projected to go broke faster as a result of the economic downturn.

These looming deadlines, coupled with the dire debt numbers, threaten to cause serious damage to the economic opportunity and prosperity of Americans.

Rising debt with no viable plan to curb it puts America at risk of a financial crisis. The U.S. federal government has benefitted from historically low interest rates on its debt over the last several years, and investors have not yet lost confidence in the nation. But that doesn’t mean that the tides won’t quickly turn. Fiscal crises are often sudden and severe, leaving no option for a gradual retreat.

A recent downgrade of the U.S. credit outlook was a warning signal that the United States’ debt trajectory is unsustainable. Even small increases in interest rates would quickly add up given the enormity of the debt.

The Congressional Budget Office projects that the federal government will pay $664 billion in interest costs in 2030, with the average interest rate at 2.1%. If interest rates were to double to 4.2%—something entirely possible (rates were generally above 6% from the 1970s to 1990s)—interest spending would require $1.2 trillion in tax revenues in 2030. At an annual cost of $8,350 per household, interest costs are set to exceed what the average household spends on food.

Rising interest costs could quickly crowd out other spending, and it would be nearly impossible to tackle America’s debt without addressing entitlement programs like Medicare and Social Security, which consume $2 out of every $3 in spending.

But the longer policymakers delay, the larger the consequences become. No one wants to have to abruptly cut Social Security benefits for retirees.

It’s possible to improve those programs, save costs, and give workers more control over their futures.

For example, by better-targeting Social Security benefits, using a more accurate inflation measure, and tying Social Security’s eligibility age to increases in life expectancy, the program would become solvent and workers would get a payroll tax cut.

Another consequence of our accumulating debt is that it increases the likelihood of destructive tax hikes. While spending reductions are the most effective way to lower deficits, bipartisan deficit deals often include a revenue component for “balance.”

It is important to remember that Americans already pay more in taxes than they do for housing, food, and clothing combined.

Given how quickly spending has grown in recent decades, and how much it will continue to grow unless major reforms are enacted, the only way to prevent the same kind of heavy tax burden that we are seeing throughout Europe is to focus on reining in spending.

In addition to necessary, large benefit program reforms, there are many other ways for Congress to improve the nation’s financial health. These include refocusing the federal government on core priorities, eliminating wasteful spending, returning to a regular budget process, and strengthening economic growth.

COVID-19 has resulted in tremendous tragedies and hardships across the world. As the Congressional Budget Office report demonstrates, it has imposed enormous economic and fiscal consequences for the U.S. Policymakers must proceed cautiously in the near-term, focusing spending on combating the virus.

As the U.S. emerges from this pandemic, lawmakers will need to take a serious reckoning of the federal budget. Failure to do so could result in moving directly from a health crisis to a fiscal crisis.