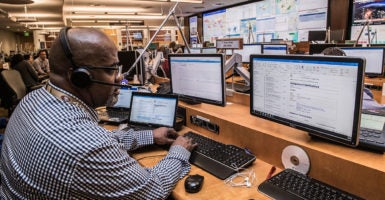 As America works toward bringing the COVID-19 pandemic under control, it is vital that the public and leaders make smart and informed decisions.

To that end, The Heritage Foundation’s National Coronavirus Recovery Commission has released its final report, which features recommendations for policymakers, civil society, families, and businesses.

Although most of the commission’s recommendations focus on reopening the economy and civil society, it also makes prescriptions for something we should not wait to address: preparing for the next pandemic.

Among the commission’s preventative recommendations is a renewed federal focus on proper national priorities, including fighting the never-ending war on communicable diseases. It’s worth taking a closer look at why the commission included this recommendation.

The federal government’s top priority should be defending the nation and preserving our way of life. This principally means maintaining a strong military to protect the nation from armed threats.

Another threat to our way of life—one we are currently dealing with—is from deadly viruses and bacteria. The Centers for Disease Control and Prevention was created to protect Americans from these invisible menaces.

As things stand, matters truly federal in nature are forced to compete with countless other activities for attention, many of which are political pet projects that provide minimal value to the public.

Over the past century, Washington has expanded its role in ways that are contrary to the nation’s founding principles of limited government. It micromanages the economy through regulation, and taxes and spends trillions of dollars every year to fund thousands of programs.

Unfortunately, the Centers for Disease Control and Prevention often is perceived as having fallen victim to the same lack of focus as the rest of the federal government. Rather than fixating on communicable diseases, the CDC has wandered into topics such as obesity and gun control.

It’s arguable that if the CDC had maintained a focus on its core mission, it would have had more resources available to respond to the current crisis. This is especially relevant when considering that the agency’s budget has grown faster than inflation for decades.

While federal agencies have an obligation to perform their assigned duties as best as possible, Congress is responsible for monitoring the agencies that it authorizes and funds.

This leads to another reason why legislators should streamline federal activity: The sprawling nature of the federal government has made congressional oversight more difficult.

If the federal government were smaller, Congress could better ensure that true national priorities are administered properly. After all, there are limits to how many things to which 535 members of Congress and their staff can devote sufficient attention.

The result of unchecked federal agencies and limited congressional capacity is broad swathes of federal activity where legal authorizations have ended, resulting in “zombie” agencies and programs.

While the trend toward a bloated and unfocused government has been ongoing for generations, it is still possible to rein in the federal leviathan.

Congress has an opportunity to directly address the problem this summer through the appropriations process. Twelve spending bills that fund federal agencies are due by the end of the fiscal year Sept. 30.

Through drafting the text of bills and amendments, legislators have the ability to remove unnecessary agencies and bureaus, and can give directions on how agencies use allotted funds.

For the CDC, Congress should review its spending accounts and determine which are needed for carrying out the core mission of communicable disease control. Evaluating which accounts are still needed to achieve that goal—and then removing unnecessary accounts—would dramatically enhance the agency’s focus.

For other agencies, The Heritage Foundation’s “Blueprint for Balance” contains hundreds of policy ideas for streamlining the federal government. This would increase transparency and accountability for government performance, and would make Congress give more attention to issues of real national importance.

The National Coronavirus Recovery Commission is correct in calling for the federal government to focus on its core mission. In the case of the CDC, legislators should review, evaluate, and ensure that they’re focused on top priorities of protecting public health. This would help the response and prevention of future outbreaks.

Ultimately, that is a goal all Americans should be able to agree on.