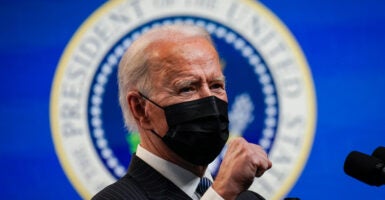 This so-called skinny budget proposal would drive up wasteful spending, shortchange actual priorities such as national security, and increase the likelihood of the appropriations bills not being passed through regular order.

The budget is unreasonable and irresponsible, and Congress should instead chart its own course for the fiscal year 2022 appropriations process.

Now that the Budget Control Act has expired, there’s not yet an agreement on what the overall spending level should be. Nevertheless, we do know that this agreement must be reached on a bipartisan basis.

While Biden is attempting to implement most of his partisan agenda through the budget reconciliation process, which can be enacted with just 51 votes in the Senate, discretionary spending does not qualify for reconciliation.

In total, Biden proposes $1.5 trillion in discretionary spending for fiscal year 2022, a $124 billion increase above the non-emergency amount provided in fiscal year 2021. That represents a 9% increase, higher than the increases in prices, wages, population, or the economy.

This unreasonable and irresponsible proposal will not attract the support needed from across the aisle.

Perhaps even more important than the top-line spending levels are what the taxpayers’ hard-earned dollars are to be spent on. On that score, Biden’s budget request gets a failing grade.

Agencies known for promulgating job-killing regulations, such as the Internal Revenue Service, the Environmental Protection Agency, and the Department of Labor, would see substantial increases in spending authority.

The Department of Education would be in line for an increase of more than 40%, on top of the unprecedented federal funding sent to the education establishment over the past year, even as the teachers unions have opposed resuming in-person schooling.

At the same time as these low-priority programs see increases, the president’s budget proposes to shortchange constitutional priorities, such as our national security.

In one positive development, the budget does propose shifting planned spending that had previously been designated overseas contingency operations as a way to fund military requirements and get around spending caps back into the base budget, as has been recommended by The Heritage Foundation.

But this reform is overshadowed by the expansion of the Pentagon’s mission into things like climate change without providing adequate resources for defense needs.

Instead of this irresponsible budget proposal, Congress should follow a very different path for the fiscal year 2022 appropriations process.

Congress must exercise spending restraint. The federal government spent $6 trillion in the past year in the name of COVID-19 (even if much of this spending had nothing to do with addressing the pandemic) on top of the already unsustainable budget. And the president has recently released a massive $2 trillion tax-and-spending proposal.

Instead of new spending, it is important for Congress to start implementing a responsible budget.

Lawmakers should carefully review the budget and wind down programs that do not carry out the proper constitutional powers of the federal government and are otherwise unnecessary. At the same time, Congress should ensure that important priorities receive responsible funding levels.

Vital riders, such as the long-standing Hyde Amendment to protect taxpayers from paying for abortions, must be included.

Finally, Congress should not include earmarks in the spending bills. Despite an effort to rebrand them with the euphemism “community project funding,” there is nothing more emblematic of the proverbial Washington “swamp” than earmarks.

Earmarks encourage wasteful spending, spawn corruption, and are not a viable tool for properly exercising Congress’ Article I powers or for ensuring regular-order legislating.

Biden’s budget request should be disregarded and Congress should chart a responsible path forward to complete the appropriations process.