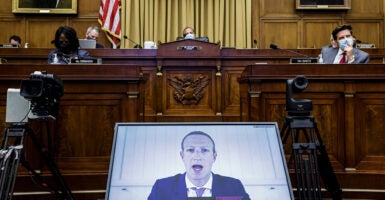 During the Obama administration, the nation’s regulatory burden increased by an astonishing $122 billion annually, according to analyses by Heritage Foundation experts, or “nearly double the $68 billion in private-sector costs imposed under the Administration of President George W. Bush.”

As large as that cumulative cost is, however, it does not account for the total costs of the Obama administration rules. The $122 billion figure includes only major regulations, not the thousands of administrative rules issued every year. It also does not capture significant but intangible costs such as lost innovation or violations of individual liberty.

Exacerbating matters, independent agencies are not required to conduct cost-benefit analyses for new major rules, even though some of these agencies generate a large number of regulations.

Since publication of the last Mandate for Leadership, the Trump administration launched a multifaceted reform agenda that has been continuously challenged by “resistance” forces both within and outside the agencies.

This shift in regulatory policy has gone almost unnoticed for the last two years. There has been a significant slowdown to his predecessor’s unceasing rule-making, and many of the signature regulatory initiatives implemented by the Obama administration have been challenged or blocked.

For example, the current administration withdrew the greenhouse gas emissions standards for model years 2022–2025, concluding that they were based on “outdated information” and are “not appropriate” in light of the record before the Environmental Protection Agency. The EPA instead is proposing to maintain the 2020 standards at a savings of $500 billion.

Similarly, as part of a broader effort to scale back the Obama administration’s vast web of global warming programs, the president announced the U.S.’ withdrawal from the Paris climate agreement on June 1, 2019, which former President Barack Obama had signed as an executive agreement on April 22, 2016.

On January 30, 2017, President Donald Trump issued Executive Order 13771, which requires agencies to offset the cost of any new significant regulation (or guidance) with at least two deregulatory actions.

The executive order also established a regulatory budgeting system under which the Office of Management and Budget assigns to agencies a cap on the amount of “incremental costs” that would be allowed for the fiscal year.

This regulatory budgeting is intended to inject a modicum of economic discipline into rule-making. If agencies are compelled to restrict the costs imposed on the public, they must engage in a type of rolling retrospective review of the vast accumulation of rules that comprise more than 185,000 pages in the Code of Federal Regulations.

The Office of Management and Budget’s Office of Information and Regulatory Affairs projects that the fiscal year 2020 caps will reduce regulatory costs by $51.6 billion (in present value).

On Feb. 24, 2017, the president issued Executive Order 13777, which directed the head of each regulatory agency to designate a regulatory reform officer to oversee the implementation of regulatory reform initiatives and policies within the agency.

Under the order, each agency established a regulatory reform task force to evaluate regulations and recommend those that are appropriate for repeal, replacement, or modification.

Creation of the regulatory task force is intended to broaden the search for regulations that “eliminate jobs or inhibit job creation”; “are outdated, unnecessary, or ineffective”; “impose costs that exceed benefits”; “are insufficiently transparent to meet the standard for reproducibility”; “or implement Executive Orders and other Presidential directives.”

The number of “major” rules—those anticipated to cost the private sector $100 million or more annually—numbered just 32 compared to 73 under Obama and 51 under Bush.

Regulatory proponents have challenged virtually every reform put forth by the Trump administration, often claiming that public health and the environment are at risk absent aggressive government intervention. In reality, the biggest improvements in environmental quality result from technological innovation, which is inhibited by command and control rule-making.

In contrast to the president’s commitment to reform, his apparent sympathy for internet regulation is deeply troubling. Ill-conceived regulation would actually secure the market dominance of Facebook, Google, and other popular platforms (which is part of the reason Silicon Valley titans have endorsed a degree of government interference).

The current or future president must not abandon fundamental free-market principles in demanding either corporate or government action to remedy online grievances.

To the extent that Google, Facebook, or others appear to discriminate against conservatives, the more effective response would be to abandon the offending platforms and frequent more neutral competitors—or to create their own.