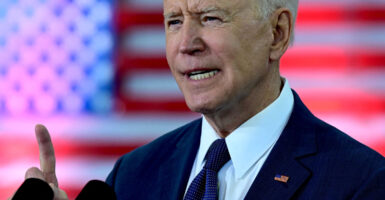 The Biden administration on Wednesday released details of the first part of its latest enormous spending plan.

Although President Joe Biden is promoting the plan as a way to create jobs through infrastructure projects, its combination of tax hikes and central planning would leave the nation poorer and more dysfunctional.

Amazingly, this $2 trillion-plus in spending and $400 billion in tax subsidies covers only part of an increasingly radical wish list. The White House will announce details on the second part of the plan, focused on welfare programs, in a few weeks.

The government paid for the $6 trillion in combined COVID-19 relief, economic “stimulus,” and politically motivated bailouts over the past year by adding to the national debt.

In contrast, the new Biden plan uses tax hikes for businesses and investors to facilitate a big expansion of federal power.

Given that the economic recovery during the pandemic is still fragile, the last thing we need is tax increases that discourage private sector investments and make us less competitive in global markets.

The 2017 tax cuts provided enormous benefits to Americans across the income scale. Rather than continue the pro-growth success of tax reform, the Biden plan would gut it.

Instead, the plan recycles bad ideas from the Obama administration and scales them up. For instance, the plan uses 15 years of tax revenue to pay for just eight years of spending, similar to budget gimmicks that were part of Obamacare.

More importantly, the plan envisions that only a bigger federal government can solve the nation’s problems and create jobs. Yet former President Barack Obama’s 2009 “stimulus” package was a failure at creating jobs because federal infrastructure spending is slow and wasteful and serves to pull skilled workers away from private construction jobs.

Another recycled gimmick that the plan relies on is hiding opportunistic spending provisions behind a popular word.

Just a few weeks ago, Congress passed a $1.9 trillion package that lawmakers labeled “COVID-19 relief,” despite the fact that health spending accounted for less than 10%.

Now we see the word “infrastructure” deployed as a shield because most of us associate the concept with roads and bridges that we drive on every day. In reality, though, only about 5% of the Biden plan ($135 billion of the $2.25 trillion total) would go toward roads and bridges.

Instead, the plan would spend more on subsidies for electric vehicles (which benefits wealthier households), corporate welfare, and other things entirely unrelated to infrastructure such as health benefits and job training programs with a long history of failure.

Not only would this plan damage the economy and waste unimaginable amounts of taxpayer money, but it also would cause permanent damage to our democracy.

By enacting federal programs to micromanage state, local, and private sector responsibilities such as drinking water, internet, housing, school buildings, and the power grid, Washington would have too much control over too many things.

To do so at a time when the federal government is already too large for Congress to oversee, and growing faster than we can possibly afford, is a recipe for dysfunction and unaccountable governance.

Many goals of the Biden plan would be better accomplished by getting government out of the way rather than handing more power and money to Congress and federal bureaucrats.

For example, we could have better roads and bridges using existing spending by getting rid of federal red tape that makes construction projects take longer and cost more. Deregulation and further tax reforms can aid businesses and add permanent jobs throughout the country. Local reforms to boost residential development would improve housing affordability far more than hundreds of billions in federal spending.

Despite the big promises surrounding this latest multitrillion-dollar spending package, Americans should recognize that the plan would do tremendous harm to the economy and our foundational system of divided government.

Congress should avoid blindly supporting the extreme agenda that the president’s plan represents.