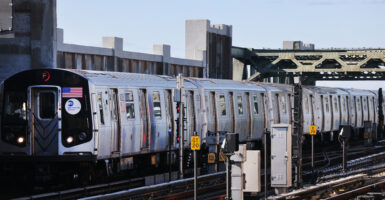 A subway train arrives at a Brooklyn station on Nov. 18 in New York City. In a bid to save $1.2 billion, the Metropolitan Transportation Authority announced a budget that would cut service on subways and buses by as much as 40%, and by 50% on commuter rail lines. (Photo: Spencer Platt/Getty Images)

News of big cuts to New York’s Metropolitan Transportation Authority service and staffing levels in 2021 has led to calls for a massive federal bailout of the nation’s biggest transit agency.

Rather than forcing Americans living hundreds or even thousands of miles from New York to cover the MTA’s shortfalls, the agency should take a closer look at why its operating costs are sky-high.

The COVID-19 pandemic has hit certain sectors of the economy much harder than others. A combination of government-mandated lockdowns, the increased use of remote work, and individuals avoiding public spaces has caused a steep decline in patronage at restaurants and hotels, and in non-automobile travel.

It’s no surprise that people in and around New York City are using subways and buses far less often than a year ago. As a result, revenue from fares has dropped by billions of dollars, blowing a hole in the agency’s budget.

The federal government provided a lifeline in the spring, with lawmakers earmarking $25 billion for transit agencies as part of the CARES Act. Of that, $4 billion went to the MTA, allowing it to avoid big cutbacks in 2020.

A new COVID-19 relief proposal introduced by a bipartisan group of senators would provide billions more to public transit agencies.

However, the MTA is requesting an additional $12 billion from Washington, triple what it already received. This huge sum is based on anticipated losses through 2024, combining fare losses and below-average subsidies from state and local governments.

While many businesses across the country have had to close or radically cut costs to stay afloat, the MTA has put forward savings options that are only a fraction of the size of its anticipated losses. In a classic example of “Washington Monument Syndrome,” the cuts focus heavily on reduced service levels, which is what would most inconvenience the general public.

Yet there is a much more obvious target for streamlining the MTA’s budget; namely, bringing labor costs down to earth.

First, there’s $15,000 in overtime pay per employee, then more than $30,000 per person in “health and welfare” benefits, and a further $20,000 per person for the pension system. These costs have exploded over the past decade and almost add up to the cost of base salaries.

Such gold-plated benefits make every aspect of the MTA’s operations expensive, as evidenced by a $5.5 billion price tag in 2019 for adding elevators to just 70 train stations. Worse, the union contracts make it harder for the MTA to adjust to changing circumstances such as the pandemic.

Financial strains from overcompensated government employees are wrecking budgets in cities and states across the country.

For example, the American Legislative Exchange Council estimates that state employee pension plans are underfunded to the tune of $4.7 trillion. This is due to promising excessive benefits without setting aside the necessary funds to make good on those promises.

The root cause of those problems is—as President Franklin Roosevelt and George Meany, the AFL-CIO’s first president, explained—that public sector bargaining (in the traditional sense of private employee unions) was “impossible” and would lead to “unthinkable and intolerable” actions.

Unions can make sense in a private workplace, but not the government, because it is impossible for “we the people” who make up the government to have a seat at the table in union negotiations.

Indeed, the incentives are perverse in the public sector. Where businesses have a bottom line to maintain and try to remain in business for the long run, elected officials can buy support by propping up government employee compensation and shifting costs beyond their time in office.

Since government employee compensation is the top issue for unionized workers, but obscure for the general public, there’s much more pressure from unions to increase and preserve benefits, rather than from taxpayers to rein in out-of-control costs.

The solution for the MTA and for governments from coast to coast is to adjust employee compensation and reduce the power of government employee unions.

That would include ending collective bargaining, making pension plans sustainable, and ending the too-common practice of using taxpayer funds to pay for union operations. At the very least, the MTA should realize that it is absurd to expect federal taxpayers to cover the $151,693 average cost of its employees.