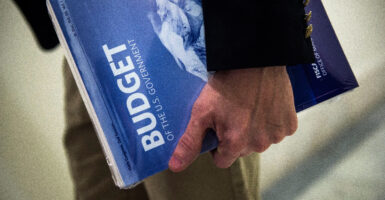 The Congressional Budget Office released the newest version of its “Budget and Economic Outlook” on Thursday, and the fiscal outlook over the next decade is grim.

Spending, taxes, deficits, and the debt are all projected to increase to record levels.

Even assuming no new spending is adopted, the government is projected to spend $61 trillion, collect $49 trillion in revenues, and accumulate an additional $12 trillion in additional deficits over the next 10 years.

The sums involved are so enormous that they boggle the mind. To put the budget in terms more relatable, that amounts to more than $476,000 in spending and $381,000 in taxes per American household.

The gross national debt will rise to nearly $40 trillion in fiscal year 2031 from “just” $28 trillion today.

The CBO report makes clear that spending is the cause of increased debt levels. Tax revenues are projected to be slightly above their historical average.

Despite the elevated tax burden, deficits and debt are projected to skyrocket. How could this be? Because spending levels are currently above the historical norm and are projected to go much higher still.

Over the past 50 years, spending has averaged 20.4% of gross domestic product. Under the CBO’s new baseline, spending is projected to grow to 23.2% of GDP by fiscal year 2031. If we would spend “only” at the normal level over the next decade, in 2031, annual spending would be nearly $1 trillion lower than what is projected.

Perhaps the one bit of good news is that the projected economic outlook has improved, compared with what was expected at the depths of the pandemic-induced recession, calling into question the wisdom of a $2 trillion untargeted “stimulus” proposal.

The unemployment rate is expected to fall to 5.3% by December, close to what is considered the normal rate of joblessness. After the economy shrank by 2.5% last year, real GDP growth is projected to be 3.7% this year.

But that does not mean we can take an improved economy as a given. Irresponsible government policies, such as oppressive regulations, burdensome taxes, and reckless spending could pose a threat to American prosperity.

The COVID-19 pandemic and the government’s response have no doubt placed a strain on the federal budget. Congress has provided more than $4 trillion in aid over the past year related to COVID-19, but it’s important to keep in mind that the federal budget was already out of control and unsustainable prior to the pandemic, with annual deficits breaching the $1 trillion mark with no end in sight.

What’s worse is the negative consequences a federal government that is too large and too burdensome has on individuals, families, and communities.

When the federal government grows beyond its constitutional bounds, and spends and taxes too much, it stifles prosperity, infringes on liberty, and makes it more difficult to live the American dream. That status quo is unacceptable.

Congress should begin taking steps to implement a responsible budget. Policymakers should carefully review the budget and wind down programs that do not carry out the proper constitutional powers of the federal government and are otherwise unnecessary.

The major entitlement programs, including Social Security and Medicare, require reform to be placed on a sound footing and to allow them to operate more effectively for those who benefit from them—and the taxpayers.

This most recent report from the CBO should be a wake-up call for policymakers to start confronting overspending.