COVID-19 Pandemic Adds to the Urgency of Medicare Reform 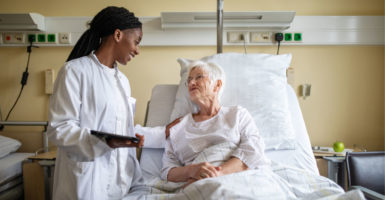 While Americans are focused on the COVID-19 pandemic and its damage, the Medicare trustees are warning—once again—of the enormous financial challenges posed by the accelerated spending of the Medicare program.

That condition is guaranteed to worsen dramatically in 2020 because of the devastating impact of COVID-19 on the nation’s economy, including massive unemployment and major revenue declines, combined with an unprecedented explosion of trillions of dollars in deficit spending.

Medicare’s hospitalization insurance program (Part A) is running annual deficits and projected to become insolvent in 2026, the same as last year’s projection.

That means that Medicare will not be able to cover all of the costs of Medicare beneficiaries’ hospital benefits.

In addressing that problem, the trustees warn that the Medicare hospitalization program meets neither the short-term nor long-term standards of “financial adequacy.”

In their estimation, long-term balance would be secured through either an “immediate” increase in the Medicare payroll tax from 2.9% to 3.6% or a cut in Medicare hospitalization spending by 16%.

The trustees say, however, that the balance could be achieved more gradually, but in either case, the coming taxes would be steeper or the dreaded spending reductions would be deeper.

In normal times, the pending insolvency of the Medicare hospitalization program, predicted year in and year out, almost always grabs considerable media attention. The truth is, however, that the hospitalization deficits and threatened hospital insurance insolvency are only a part of a much bigger problem.

The real fiscal challenge is the sheer size of Medicare’s overall spending growth, taking an ever-larger share of the federal budget, the economy, and taxpayers’ paychecks.

Whether the trustees’ projections are based on current law or likely policy, the basic outcome will be the same. As the Medicare trustees report: “Growth under either of these scenarios would substantially increase the strain on the nation’s workers, the economy, Medicare beneficiaries, and the Federal Budget.”

Funded by income taxes, general revenues account for roughly three-quarters of Part B costs. The trustees report that the drawdown on general revenues is going to accelerate year by year, eating up larger and larger chunks of federal income and business taxes.

In 2020, the trustees project that general revenues to fund Part B will amount to 15.8% of personal and business income taxes. In 10 years, that amount will jump to 22.1% of all such taxation.

This year, the trustees again made such a determination, and thus issued a “Medicare Funding Warning” to the Congress and the president.

This is the fourth consecutive year that the trustees have issued such a warning. Thus far, the law has been cavalierly ignored.

If the law is ignored again, the taxpayer costs will be even higher. Based on pre-COVID-19 projections, the average annual Part B growth over the next five years was projected to be 8.2%, almost twice as fast as the growth in the general economy, projected at 4.3%.

With the substantial damage to the economy caused by the 2020 pandemic, that ugly gap will yawn even larger, and the program will become even less sustainable than projected by the trustees. Something’s got to give.

Seniors are rightfully anxious that Medicare delivers affordable and high-quality care, but larger chunks of their Social Security checks are going to be taken to cover their rising Medicare premium costs.

Young working families, mostly oblivious to the costs facing them, are going to bear the brunt of Washington’s continued failure to act responsibly.

Under current Medicare law, doctors, Medicare beneficiaries, and taxpayers are caught in a tightening vice grip. On the one hand, Congress can double down on Medicare’s administrative pricing and price controls—further ratcheting down hospital and physician reimbursement to “control costs,” which inevitably threatens seniors’ access to quality care.

On the other hand, Congress can impose higher and higher taxes on individuals and families in the short term, while adding to the tens of trillions of dollars in unfunded Medicare obligations that they have already incurred. That is real long-term debt, though it does not show up in standard federal debt estimates.

The only way to efficiently control costs and ensure the delivery of higher-quality medical goods and services is to replace central planning and price controls with expanded beneficiary choice and robust market competition, reduce unnecessary regulation, and foster innovation in the financing and delivery of medical care.

As The Heritage Foundation and many others have proposed, the best way to accomplish that is to transform the entire Medicare program into a fully transparent, defined-contribution (“premium support”) system for coverage, while opening the program up to new and better methods of care delivery.

The COVID-19 crisis makes transformative change all the more urgent.

In their latest report, the Medicare trustees once again exhort Congress and the president to work together “urgently” to address the short-term threat of insolvency in the hospitalization program and the longer-term problem of Medicare spending.

“The sooner solutions are enacted, the more flexible and gradual they can be,” the trustees say.

In line with many other measures necessary to spur economic recovery in the aftermath of COVID-19, Washington policymakers must finally get serious about Medicare reform.