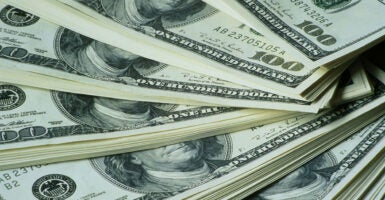 Republican proposals submitted during the Trump administration would have made significant progress toward reducing the national debt, but they were given little consideration by Congress. (Photo: Alan Schein/Getty Images)

Over the past four years, lawmakers have failed to make any meaningful budget reforms, and the nation’s deficit and debt levels have continued to grow as Congress and the Trump administration have enacted legislation that only makes the problem worse.

All of the president’s budget proposals have called for significant reductions in nondefense spending. This allows the federal government to focus on its core constitutional responsibilities, like national defense, while living within reasonable spending limits. It is also key to reducing the scope of the federal government and enabling private innovation as well as empowering state and local authorities to address the needs of their populations.

Congress has failed to act on these reforms.

In support of this effort, the administration also submitted a rescissions package to Congress that would have recovered billions of unused federal dollars.

Rescinding unobligated funding has long been a presidential and congressional power. It allows the federal government to adjust to changing budget needs and reprioritizes funding as necessary.

Congress was unable to pass this package because lawmakers wished to repurpose these unspent funds rather than use them for deficit reduction.

While the administration’s work to limit the size and scope of the federal government is important, it is not significant enough to fix the long-term problem of sustainability that the federal budget faces.

Two-thirds of the federal budget goes toward autopilot mandatory programs such as Medicare, Medicaid, and Social Security. The president’s budget proposals have put forth modest health care and Social Security Disability Insurance reforms, but they would not fundamentally reshape these programs.

Without significant reforms to ensure the long-term solvency of entitlement programs, it will be impossible to balance the budget and change the nation’s fiscal course for the better.

The lone attempts at spending reforms from Congress have been the budgets proposed by the House Budget Committee in fiscal year 2018 and fiscal year 2019 and the Republican Study Committee’s proposals for fiscal year 2018-2020. Each of these proposals would have balanced the budget in less than 10 years while significantly reforming entitlement programs.

The Republican Study Committee’s budgets in particular show the type of strong leadership and reforms that are needed to reshape the federal budget and get the nation’s fiscal house back in order.

Each of these proposals would have made significant progress toward reducing the national debt and restraining spending, but much like the president’s budgets, they were given little consideration by Congress.

Congress also established a Joint Select Committee on Budget and Appropriations Process Reform, a product of the Bipartisan Budget Act of 2018.

The committee was tasked with “provid[ing] recommendations and legislative language that will significantly reform the budget and appropriations process” in hopes of ending the budget dysfunction that has consumed Congress over the past few decades.

Ultimately, the committee produced reforms that did nothing to address the actual debt and actually could have made the current budget process even less responsible and transparent than it already is.

However, the legislation was never brought to the House or Senate floor, and no changes were enacted.