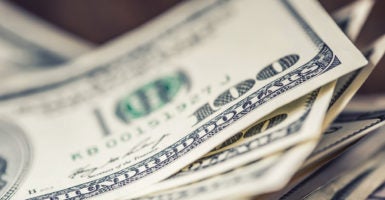 President Donald Trump on Tuesday submitted a special message to Congress requesting that $15 billion in unspent funding be rescinded.

That’s a good first step toward re-establishing fiscal responsibility. Congress should embrace it and quickly adopt the president’s rescission package.

Still, the package does nothing to claw back the tens of billions of additional dollars in wasteful spending authorized by the 2018 Omnibus Appropriations Act. Nor is it the answer to the nation’s long-term debt problem.

Congress and the president should work together on additional rescission packages that target 2018 spending and pass a fiscal year 2019 budget that rolls back the latest budget deal and addresses the programs driving the national debt.

The president’s rescission package would take back $15 billion in previously provided spending authority. Of that, $7 billion would come from funds provided in 2017 to the Children’s Health Insurance Program, also known as CHIP. No authority was ever actually granted to CHIP to spend that money.

The obvious question: If the money was never going to be spent anyway, then how is it “saving” taxpayers money to rescind it? CHIP rescissions have been abused by Congress as one of the most common budget gimmicks to pay for unrelated spending. By rescinding these funds and returning them to the Treasury, they can’t be used to pay for other spending.

A further $4.8 billion in rescission comes from the Department of Energy’s advanced technology vehicle manufacturing and innovative technology loan programs.

The loan programs are remnants of the 2008 auto industry bailout. Neither has generated new loans since 2011.

Unspent emergency funds from the 2015 Ebola outbreak and from relief provided in the wake of Superstorm Sandy in 2012 are also in the rescission package. The remainder of the request is spread across several agencies and programs.

The funds targeted have, in most cases, been sitting for years and are unlikely ever to be spent. It should make sense to members of Congress—Republicans and Democrats alike—that taxpayers would be better served if this money were used for deficit reduction.

The rescission process was commonly used by presidents from Thomas Jefferson to Bill Clinton, but it hasn’t been used in the past 20 years. This noncontroversial package should serve as a reminder to lawmakers as to how the process works, in addition to saving some money.

But Congress and the president shouldn’t stop there. The 2018 omnibus bill provided $63 billion in new nondefense discretionary spending beyond the caps set by the Budget Control Act of 2011. Trump should submit additional rescission requests that cut down this unwarranted spending increase.

When signing the omnibus, Trump vowed to “never sign another bill like this again.” To avoid having to do just that, in the coming months, Congress should pass a fiscal year 2019 budget resolution that rolls back the $68 billion in non-defense discretionary spending increases that were part of the February budget deal.

While reducing discretionary spending is important, mandatory programs such as Social Security, Medicare, Medicaid, and welfare programs are what is really driving the nation’s $21 trillion debt.

While the rescission package submitted by the president Tuesday is not the answer to fixing our mounting debt problem, it is a good first step toward rebuilding fiscal responsibility and for re-establishing a tool to restrain spending.

Trump should build on his initial request and seek to eliminate all manner of wasteful and unwarranted spending increases provided by Congress for 2018.