Debunking 6 Myths About the Tax Cuts and Jobs Act 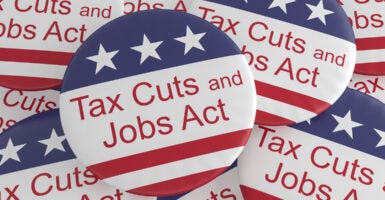 Reversing the 2017 tax cuts not only would raise Americans' taxes but make the economic recovery from COVID-19 more challenging by increasing the cost of building back a strong labor market. (Photo illustration: cbies/Getty Images)

Congress passed a $1.5 trillion tax cut and reform package in December 2017 that became the subject of heated, partisan attacks. Now, more than three years later, the Tax Cuts and Jobs Act is the subject of countless lingering mischaracterizations that fuel a push in Congress to repeal parts of the law.

Setting the record straight for lawmakers and the American people is crucial to ensuring Congress keeps taxes low and makes permanent the reforms of the Tax Cuts and Jobs Act.

Reversing the 2017 tax cuts not only would raise Americans’ taxes but make the economic recovery from COVID-19 more challenging by increasing the cost of building back a strong labor market.

Here are six of the most common myths addressed in a recent Heritage Foundation report and why they’re wrong.

Myth No. 1: The tax cuts benefited corporations, not working Americans or the economy.

The most important legacy of the tax cuts is their benefits for working Americans. Following the reform, which included significant tax cuts for businesses, the labor market improved markedly.

Wage growth increased by more than a percentage point in the two subsequent years, resulting in annual wages of more than $1,400 above trend for production and nonsupervisory workers.

New job openings also surged in 2018, the year following the tax cuts, and about 83,000 more Americans voluntarily left their jobs for better opportunities at the end of 2019 compared to the trend before the reform.

The Tax Cuts and Jobs Act also was the most significant reform to many parts of the tax code in 30 years—since President Ronald Reagan’s 1986 tax reform. Then the Tax Cuts and Jobs Act made it easier for millions of Americans to pay their taxes, simplified family benefits, and overhauled the international tax system, among many other reforms.

Myth No. 2: It was a tax bill only for the rich, so most Americans didn’t get a tax cut.

Many Americans believe they are not benefiting from the tax cuts because it was reported widely that the reform primarily benefited corporations and the wealthy. This narrative is incorrect.

The individual tax cuts benefited more than 80% of Americans, and fewer than 5% of taxpayers were projected to see a tax increase in 2018. In the $1.5 trillion tax bill, more than three-quarters of the total tax cut was for individual taxpayers.

Myth No. 3: The SALT cap increased taxes on the middle class.

The Tax Cuts and Jobs Act also included a $10,000 cap on the deduction for state and local taxes (dubbed SALT), which is available to taxpayers who choose to itemize their tax deductions—instead of selecting the now larger standard deduction.

Democrats and a few Republicans have decried how the new cap harms middle-class families. However, lower tax rates, a larger standard deduction, and changes to the alternative minimum tax offset the changes and mean that few taxpayers saw overall net tax increases.

The cap was a necessary reform to level the playing field between high-tax states and low-tax states. Among the high-income Americans who benefit from this deduction, an average  millionaire living in New York or California deducted more than $450,000 worth of state and local taxes before the cap. In comparison, an average millionaire in Texas deducted only $50,000 and therefore paid close to $180,000 more per year in federal taxes, simply for living in Texas.

Repealing the SALT cap would reinstate a tax subsidy used almost exclusively by high-income taxpayers and would benefit politicians in high-tax states at the expense of taxpayers around the country.

The Tax Cuts and Jobs Act permanently lowered the federal corporate income tax rate to 21% in 2018, down from a high of 35%.

A key campaign pledge made by then-candidate Joe Biden and congressional Democrats in 2020 was to raise the corporate tax rate to 28%.

Even at 21%, American businesses pay combined state and federal corporate tax rates similar to companies in our peer countries.

Myth No. 5: The tax cut pays for itself.

Former President Donald Trump and administration officials often claimed that tax reform would pay for itself. This claim was misleading and distracted from the real purpose of the reform.

The purpose of cutting taxes is to allow Americans to keep more of their hard-earned money, not maximize revenue for the Treasury. If Congress can responsibly reduce spending, lower revenues should be the goal of tax cuts.

The tax cuts increased the size of the economy, but not by enough to recoup all the lost revenue before the law expires.

Myth No. 6: The tax cuts caused the federal budget deficit.

Democrats and many Republicans rightly worried that the Tax Cuts and Jobs Act would contribute unnecessarily to the national debt. However, claims that the tax cuts are responsible for the federal government’s poor fiscal health are a misdiagnosis of trends that are decades in the making.

The Tax Cuts and Jobs Act did increase the budget deficit, but the law is not the underlying cause of the unsustainable U.S. budget. The systemic gap between revenues and expenditures is driven by sustained growth in mandatory spending programs since the 1970s.

Repealing the 2017 tax cuts would not change the trajectory of increasing federal budget deficits. The tax cuts (even if made permanent) represent only about 16% of the pre-pandemic budget deficit, and one year’s projected deficit in 2030 is larger than the entire 10-year cost of the Tax Cuts and Jobs Act as passed.

The 2017 tax cuts represented critical structural reforms to the U.S. tax code that will need to be made permanent in the coming years. Setting the record straight on the Tax Cuts and Jobs Act is crucial to ensuring Congress chooses to keep taxes low and make the 2017 reforms permanent.

Reversing the tax cuts based on a mischaracterization of the true effects would make the economic recovery from COVID-19 much more challenging by increasing costs for American businesses and families.