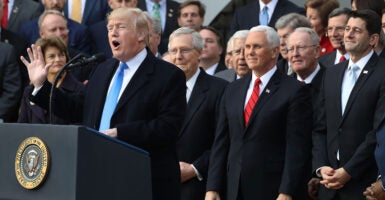 President Donald Trump celebrates congressional passage of the Tax Cuts and Jobs Act with Vice President Mike Pence (third from right) and Republican members of the House and Senate on the South Lawn of the White House on Dec. 20, 2017. Trump signed it into law two days later. (Photo: Chip Somodevilla/Getty Images)

December 22 marks the third anniversary of the signing into law of the Tax Cuts and Jobs Act, the most sweeping update to the U.S. tax code in more than 30 years.

As the economy continues to recover from the coronavirus-induced recession, policymakers shouldn’t lose sight of how the 2017 reforms resulted in immediate benefits for American workers, and even more importantly, has set up the U.S. economy for a robust recovery.

The reforms simplified the process of paying taxes, lowered rates on individuals and businesses, and updated the business tax code so that American corporations and the people they employ are globally competitive again.

For individuals, the tax cuts reduced federal income tax rates, increased the standard deduction, doubled the child tax credit, repealed the personal and dependent exemptions, and capped the deductions for state and local taxes, among many other reforms.

These will need to be extended at the end of 2025.

For businesses, the law permanently lowered the corporate tax rate to 21%, down from a global high of 35%, and temporarily provides expensing, which allows businesses to fully deduct most new U.S. investments.

The law cut taxes for the vast majority of Americans—9 out of every 10 people saw a tax cut or no change in what they paid.

The Heritage Foundation found that average households in every congressional district were projected to benefit from a tax cut of about $1,400 in 2018 and $2,900 for a family of four.

That made the tax code more progressive, leaving high-income Americans to pay a larger share of income taxes than they have since the 1980s.

Across all taxpayers, effective tax rates declined by 9.5% on average (about 1.4 percentage points). Americans continue to receive these benefits by also paying less in 2019, 2020, and the years to come.

There were also significant time savings and simplification, allowing more Americans to take the single, simpler standard deduction. Under the new system, the number of people who were able to do their own taxes increased by 4.4%.

Before the pandemic, American workers experienced the largest wage gains ever recorded, and unemployment was at a 50-year low.

In 2019, real household income reached an all-time high by growing $4,400 (a 6.8% one-year increase). The income gains were largest for minorities and lower-income earners, and as a result, income inequality declined.

Between the tax cuts and wage gains, The Heritage Foundation calculated that over the decade following the tax cuts, the typical American household would reap an additional $26,000 in take-home pay or $45,000 for a family of four. Before the pandemic, Americans were well on their way to realizing those gains.

The main way the tax cuts are expected to boost good economic trends is through increased business investment, which leads to more jobs, better technology, and eventually, productivity gains. Each of those things helps boost wages.

Immediately following the reforms, business investment, new business applications, and other indicators, such as business confidence, all surpassed expectations. For example, immediately after the tax cuts were signed into law, private net investment increased by 32% compared with the previous year.

Uncertainty regarding trade and tariffs in the following years dragged investment back down below pre-tax reform projections. The trade war, and now a global pandemic, seem to be hiding the tremendous successes of the 2017 tax cuts.

Building on Pro-Growth Successes for the Recovery

While we still have a long way to go, the economy has consistently outperformed economic projections, due in part to pro-growth policies put into place before the crisis.

That and other sources likely have given a large portion of the economy an extra cushion to draw on over the past nine months.

Second, the structural reforms that encourage higher levels of business investment do not go away in a pandemic. Because of lower business tax rates and expensing, firms that are investing are investing a bit more than they would have otherwise.

In the coming months and years, Congress will need to preserve the gains from the Tax Cuts and Jobs Act. Beginning in 2022, the most pro-growth reform—full expensing—begins to phase out, and three years later the lower tax rates for small businesses and individuals expire.

Political pressure from the left and ballooning deficits are already threatening the gains from tax reform.

Without budget reforms that bring spending growth under control, businesses, families, and investors alike can expect tax hikes in the future.

By rejecting unsustainable growth in government spending and making the 2017 tax cuts permanent, lawmakers can foster the conditions for a strong economy in the years ahead.