How 2 Years of Tax Cuts Have Supported Our Strong Economy 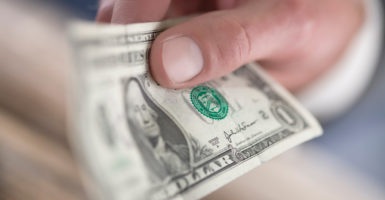 "Despite claims to the contrary, every income group benefited from the tax cut," writes Adam Michel. (Photo: Zero Creatives/Getty Images)

This month marks the two-year anniversary of the Tax Cuts and Jobs Act, the most sweeping update to the U.S. tax code in more than 30 years.

The reforms simplified the process of paying taxes, lowered rates on individuals and businesses, and updated the business tax code so that American corporations and the people they employ can be globally competitive again.

The tax cuts included a long list of reforms that are worth reviewing.

For individuals, the tax cuts reduced federal income tax rates, increased the standard deduction, doubled the child tax credit, repealed the personal and dependent exemptions, and capped the deductions for state and local taxes, among many other reforms. These expire at the end of 2025.

For businesses, the law permanently lowered the corporate tax rate to 21%, down from a global high of 35%, and temporarily allowed businesses to fully deduct most new U.S. investments.

The tax bill cut taxes for the vast majority of Americans—9 out of every 10 people saw a tax cut or no change in what they paid.

Using IRS data, The Heritage Foundation found that average households in every congressional district were projected to benefit from a tax cut in 2018. Most Americans received their tax cut through lower employer withholding and thus bigger paychecks.

We don’t have to guess anymore about the effects of the tax cuts. After actually filing their taxes with the IRS, Americans saw their average effective tax rates decline by 13% (or about 1.5 percentage points). Despite claims to the contrary, every income group benefited from the tax cut.

There were also significant time-savings and simplification. Not every part of the tax code was streamlined, but for most individual taxpayers, taxpaying is now more straightforward.

In 2017, 30% of households itemized their taxes, a more complicated process of documenting and calculating a list of discrete write-offs, such as the mortgage interest and charitable deductions.

In the first year of the tax cut, itemizers dropped from 30% to 10%, showing that millions of Americans opted for the single, simpler standard deduction. Under the new system the number of people who were able to do their own taxes increased by 4.4%.

American workers and businesses have been doing better almost every year since the Great Recession. But the past several years have been different. Things aren’t just a bit better—we’ve been setting records.

Unemployment is at a 50-year low of 3.5%. Businesses have added jobs for 110 straight months, the longest streak on record, and there are more jobs available than people looking for them.

Wages have also been increasing. Average wage growth over the past year was 3.1% in the most recent government data. Non-supervisory and production worker wages grew even faster, at 3.7%. Before 2018, wage growth hadn’t reached 3% since 2009.

The lowest wage earners in the U.S. have been experiencing some of the largest wage gains. The 10th percentile wage earner (people making about $12 an hour) have benefited from a 7% wage increase from the third quarter of 2018 through the same in 2019, in the most recent quarterly data. That’s more than twice the gain in average wages and roughly equivalent to a $1,500 raise for someone earning less than $25,000 a year.

Between the tax cuts and wage gains, The Heritage Foundation calculated that over the decade following the tax cuts, the typical American household will reap an additional $26,000 in take-home pay or $45,000 for a family of four. That’s more than enough to buy a new car or put a down payment on a house.

The American people seem to be internalizing all the good news. Job satisfaction and consumer confidence are high. Thanks to the strong economy, Americans who aren’t happy at their current work are voluntarily leaving their jobs for better opportunities at close to record rates. And Americans are saving more too, using the good economic times to prepare for their future.

The main way the tax cuts are expected to contribute to furthering the good economic trends is through increased business investment, which leads to more jobs, better technology, and eventually productivity gains. Each of these things helps boost wages.

It wasn’t until uncertainty regarding trade and tariffs in the following year dragged investment back down below pre-tax reform projections. The trade war seems to be hiding the tremendous successes of the 2017 tax cuts.

Immediately following the reforms, business fixed investment, new business applications, and other indicators, such as business confidence, all surpassed expectations. For example, immediately after the tax cuts were signed into law, business investment increase by 39% among the 130 in the S&P 500.

In such a turbulent policy environment, assessing the long-term success of tax reform will take time as new investment and increased productivity do not happen instantaneously.

The challenge for lawmakers will be to keep taxes low in the coming years so that the full economic benefits of the 2017 tax cuts can be enjoyed by generations to come.