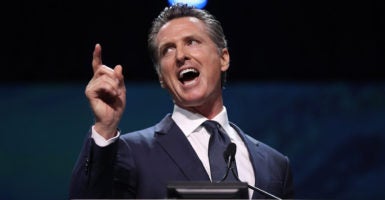 The California Assembly voted 44-11 in favor of a bill last week that broadens state Medicaid coverage to include illegal immigrants to the tune of more than $3 billion annually.

The bill would “extend eligibility for full-scope Medi-Cal benefits to individuals of all ages, if otherwise eligible for those benefits, but for their immigration status, and would delete provisions delaying eligibility and enrollment.”

In other words, under AB 4, illegal immigrants over 19 years old would receive the same full scope Medi-Cal benefits as taxpaying citizens, including keeping their chosen primary care provider.

Though the proposal now travels to the state Senate, there is still debate among Democrats about which illegal immigrants should qualify for these benefits.

Democratic Gov. Gavin Newsom, concerned over the $3.4 billion yearly increase from the bill, has advocated extending coverage for illegal aliens who are between 19 and 25 years old, costing about $98 million annually. His 2019-2020 budget already proposes $22.9 billion for Medi-Cal from the general fund of $100.7 billion.

The state Senate has put forward a budget proposal that would also include coverage for illegal immigrants of 65 years and older.

But Democratic state legislators like state Sen. Maria Elena Durazo, D-Los Angeles, who co-authored the legislation, maintains that the services should be available to all low-income people.

“They work in our hotels, they work picking the fruit and vegetables, they work as landscapers, they work in hospitals,” Durazo told The Wall Street Journal in an interview about the bill. “I don’t think they should be treated differently from other Californians.”

Paying for the health care of the undocumented in California is, in effect, a tax on people who are here legally. It would make California an even larger magnet for more illegal immigration into the state—putting incredible additional pressure on future state budgets. If taxpayers protest with their feet by moving out of state, there will be fewer taxpayers left in California to cover skyrocketing health care costs and more pressure on the people who remain to pay for these programs.

Proponents of the bill like the California Endowment, a state nonprofit public benefit corporation, claim in their #Health4All campaign that because “undocumented immigrants contribute billions of dollars to California’s economy,” they deserve the same access to health care services as its citizens.

#Health4All appears to be gaining support:

California Assembly adjourns for the evening, but not after passing a boatload of health care bills, including many on the #Care4AllCA agenda: https://t.co/4sSzVLF5cd

NEW #video preview! Every day, this dedicated immigrant caregiver cares for an elderly woman. But ironically, undocumented seniors are shut out of health care. It’s time for CA to honor ALL of our elders! #health4allelders #health4all #ImmDay19 pic.twitter.com/t5AW3Yy1zG

Jiratyut “has consistently given his time to advocate for the type of society that welcomes and celebrates the contributions of immigrants, ensures that all have access to high quality healthcare, . . . and builds communities in which all thrive. https://t.co/o1bkQ7ji06

The highest concentration of illegal immigrants is in Los Angeles, Orange, and Santa Clara counties; the Inland Empire; and the San Joaquin Valley, according to the Public Policy Institute of California. The policy group estimates that about half of the state’s illegal immigrants have incomes low enough to be eligible for Medi-Cal coverage.

The proposal, first introduced on Dec. 3, 2018, moves on to the Democrat-controlled Senate.