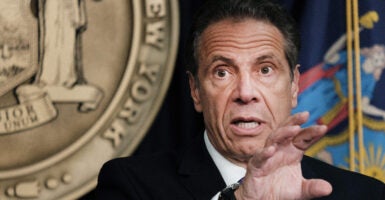 New York Gov. Andrew Cuomo, seen here at a news conference in Manhattan on Wednesday, has proposed a $103.4 billion state budget. But even that enormous amount is dwarfed by what his fellow Democrat, President Joe Biden, has proposed spending. (Photo: Spencer Platt/Agence France-Presse/Getty Images)

When I was born in western New York, it was the second-most populous state in the nation and had a whopping 34 congressional districts.

The prolonged stagnation of the Empire State has many causes, including chilly winters and the punishingly high cost of living in the New York City metro area.

Yet, none of them is as decisive as the state’s long history of big-government politics, which have encouraged families and businesses alike to move to states with better economic opportunity.

If Congress goes along with President Joe Biden’s enormous tax-and-spend proposals, America will suffer a similar decline. Worse, while there are 49 other states for New Yorkers to choose from, a nationwide stagnation would leave Americans with very limited options.

New York state’s politics have been dominated by the big-government downstate region for generations, and Albany’s appetite for spending still has seen explosive growth during my lifetime.

The budget update released in 1981 had $16 billion in spending for the state’s 17.9 million people. After adjusting for inflation, that would be $2,388 per person.

Gov. Andrew Cuomo’s latest budget for fiscal 2022 proposes $103.4 billion in spending to cover 20.2 million people, or $5,119 each, a staggering 114% increase per person in real spending from the inflation-adjusted 1981 figure. By comparison, Texas spends a more reasonable $2,003 per person.

All the extra spending in New York comes with a big cost.

The American Legislative Exchange Council’s annual analysis of the 50 states shows that New York has the highest business tax rate, the second-highest top income tax rate, the sixth-highest property tax burden relative to value, the third-highest cost of state government debt, and the highest number of people moving to other states.

As a result, the report has ranked New York’s economic outlook dead last for seven years in a row.

The relentless pounding of high taxes and heavy regulation has taken a toll. I’ve witnessed firsthand the devastating consequences that follow when government discourages private investment.

Prime examples include Rochester, New York, where Kodak has spent $200 million tearing down buildings, and the economically depressed Southern Tier. While it’s inevitable that some established businesses will eventually shrink, the lack of private sector investment means they weren’t replaced by new firms and new jobs.

Rather than using the approach of controlled spending and lower taxes that have caused a boom in states such as Texas and Florida, New York has tried the tool of “economic development” (aka corporate welfare), with little to show for it.

Unfortunately, Biden seems intent on remaking America with the policies that are ruining New York.

In the wake of a deeply flawed $1.9 trillion “COVID-19 relief” package that was larded with non-pandemic handouts, the Biden administration has released plans for more than $4 trillion in further spending increases and tax hikes.

The first proposal was a $2.7 trillion “infrastructure” plan that has more to do with corporate welfare and the Green New Deal than actual infrastructure.

Like New York, it would punish businesses as a whole while giving handouts to a few politically favored sectors in a misguided attempt to micromanage the economy.

Last week, Biden announced a $1.8 trillion “families” plan that would massively expand the welfare state (including making middle- and upper-income families reliant on it), hire legions of tax collectors at the IRS, and increase income tax rates.

That also mirrors the New York playbook of trying to fund lavish benefits programs by raising taxes on businesses and high-income individuals. But as New York shows, the resulting exodus of job creators would kneecap employment and wage growth opportunities, which is the only long-term solution to poverty.

If Congress blindly rubber-stamps these Biden proposals, it would mean a combined $6 trillion in new federal spending passed in a single year, or $50,000 per household.

It would mean gutting the 2017 tax cuts, which were vital to the low unemployment and strong wage growth we enjoyed before the pandemic.

And it would mean adding even more to the national debt, which is already more than $210,000 per household.

Rather than making Washington’s swamp deeper than ever, lawmakers should embark on a policy agenda that would boost, rather than sabotage, the post-pandemic economy. That means protecting the pro-growth tax code, removing regulations that get in the way of work and investment, and restraining the unsustainable growth of federal spending.