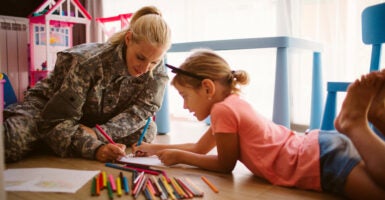 Education savings accounts for military families could improve recruitment and retention rates, since service members wouldn’t have to choose between their careers and their children’s education. (Photo: vgajic/E+/ Getty Images)

Americans deeply value the sacrifices that U.S. service members and their families make. They include overseas deployments, nationwide moves, mental health strain, or even the death of a spouse or parent.

While many military families make major sacrifices, they draw the line when it comes to their children’s education.

According to a Military Times survey, more than one-third of active-duty military personnel reported that dissatisfaction with their children’s education options was a prime factor in their decision on whether or not to remain in the military.

At the same time, 40% of respondents indicated that they declined or would decline promotions that would require their children to leave their current high-performing school.

Military families’ hesitancy to disrupt their children’s education should come as no surprise since, depending on the branch, military personnel are already required to relocate every two to three years on average.

That means that by the time many military-connected children graduate high school, they will have attended six different schools on average.

Frequent moves can have negative effects on children’s learning. In fact, the MacArthur Foundation estimated that moving can cause students to lose nearly half a year of educational attainment with each transition.

At the same time, a recent meta-analysis found that the children of deployed military personnel struggled with mental health issues such as anxiety, depression, or aggression at higher rates than children whose parents were civilians.

As such, the strains that accompany military life are significant for service members and their families, particularly when it comes to their children’s education. But the federal government, which has a mandate to provide for the national defense, has solutions at its disposal: Congress should afford the children of service members with education options that are flexible and meet their needs.

Education savings accounts for military-connected children would give families the flexibility necessary to accommodate military service and the education needs of service members’ children.

These versatile accounts provide the education funds that would have been spent in an assigned public school directly to families instead, who can then use them to pay education expenses, such as private school tuition, books, private tutoring, or other education services.

Already popular with more than 70% of surveyed service members, military education savings accounts would be a boon to families as they transition to new duty stations.

Currently, only 4% of school-aged children in military families have access to the highly esteemed base schools, which are exclusively located in the eastern United States. Due to base schools’ limited availability and the costs associated with private school tuition, many military families often have no other choice than to send their children to their residentially assigned school near the base, even if the school is not a good fit.

According to the American Enterprise Institute’s Return to Learn Tracker, the states that house the largest active-duty military populations, with the exception of Texas, continue to provide instruction in the fully remote or hybrid models.

If these families had access to education savings accounts, they could enroll in private school options, increasing their chances of having access to in-person learning. Private schools have provided in-person instruction more often during the pandemic than their public school counterparts.

Despite the welcome flurry of school choice activity in the states this year, approximately half of active-duty military personnel continue to live in states that don’t have private school choice options. Accordingly, education savings accounts for military families would offer families more flexible education options, regardless of where they are stationed in the United States.

Besides providing education alternatives to military-connected children, education savings accounts could have myriad other positive benefits, such as improving recruitment and retention rates, since service members wouldn’t have to choose between their career and their children’s education.

In fact, Rep. Jim Banks, R-Ind., has introduced a proposal that would provide education savings accounts for military-connected children. This reform would provide crucial support for military families and could improve national defense.

Service members and their families already make untold sacrifices for their country. Their children’s education, however, should not be sacrificed.

This being the Month of the Military Child, policymakers should remember that education savings accounts would provide the much-needed flexibility that accompanies modern military life and give military-connected children the education options they deserve.