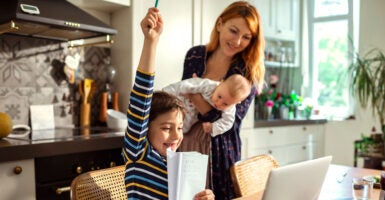 When schools closed last March due to the coronavirus pandemic, no one expected them to still be closed nearly a year later. The image projected by the public education system as a reliable and stable fixture of society has waned as classrooms remain empty.

At the same time, teachers unions—who have long tried to claim the mantle of defenders of K-12 education (an unlikely proposition pre-pandemic as well)—have disintegrated as they ignore students’ learning loss, isolation, and struggle with adequate distance learning.

For instance, members of the Fairfax Education Association demanded priority COVID-19 vaccinations for themselves. Yet, having already received their first dose, the union demanded that schools remain closed to in-person instruction this fall.

This, despite the fact that experts at the Centers for Disease Control and Protection recently found that K-12 students are rarely responsible for large outbreaks and have stated in the Journal of the American Medical Association that school reopening is safe.

Similarly, Chicago teachers refused to return to their in-person classrooms in a de facto strike, even though schools would be limited to 20% capacity.

Many state policymakers have had enough. Instead of directing education dollars to institutions—where they are vulnerable to special interest group demands—they are working to make education funds go directly to students. A student-centered education system would offer choices and flexibility to families.

New Hampshire policymakers, for instance, introduced a proposal that would provide eligible children with Education Freedom Accounts, which are parent-controlled education savings accounts.

These especially versatile accounts can be used to purchase a variety of education expenses, such as private school tuition, tutoring, books, uniforms, or specialized education programs, to name a few.

According to Sarah Gibson at NHPR, each student’s account would receive nearly $4,600, which is the “average amount of ‘adequacy aid’ the state pays per student to school district.” This amount covers between 75% to 100% of the total cost of tuition at nearly 40% of private elementary schools in New Hampshire.

At the same time, the New Hampshire Department of Education estimated that the accounts would save the state’s taxpayers $360-$390 million over the next decade.

The accounts are already widely popular in New Hampshire, where more than 70% of surveyed residents support implementing them.

Iowa policymakers are also reviewing the proposal for the Student First Scholarship Program, which provides targeted education savings accounts. Although more targeted than New Hampshire’s proposal, the Hawkeye State’s accounts could be used to purchase approved education expenses such as tuition, textbooks, curriculum, and fees.

The scholarship aims to provide education alternatives to K-12 children who are enrolled in the lowest-performing schools in Iowa.

Iowa policymakers also hope to expand charter school operations within the state and create an open enrollment system in school districts. Open enrollment means the children are no longer required to attend their residentially assigned school.

This approach vastly diminishes the district school monopoly, since it allows parents to choose the school that is the best fit for their child. As Iowa state Sen. Amy Sinclair said, “We’re talking about giving back to parents the right to hold accountable the systems that are in place for their child’s education.”

At the same time, other states are looking for ways to expand educational opportunities if special interest groups continue to refuse to return to in-person instruction.

Illinois policymakers, for example, introduced a proposal that would provide private school scholarships to students attending district schools in the event that the schools fail to offer full-time in-person learning options.

Utah policymakers floated a similar proposal that would require school districts to reallocate a portion of per-pupil funding for in-person instruction if schools do not reopen.

Marjorie Cortez of Deseret News reported that this would allow “the funding to flow to accredited private schools should a student choose that option.”

The fact that 32% of states have already introduced school choice proposals this year illustrates an appetite for more flexible learning options.

While the struggles of students stuck in remote learning are tragic, the silver lining is that more policymakers and families are willing to make student-centered education a priority. As we observe the 10th annual National School Choice Week, that’s something to celebrate.