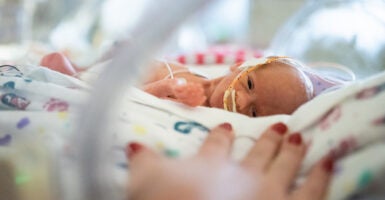 Three Republican members of Congress are taking action to force a vote on the Born-Alive Abortion Survivors Protection Act, a bill that would require a baby born alive after an attempted abortion to receive the same level of medical care as a newborn. (Photo: Jill Lehmann Photography/Getty Images)

Congressional Democrats have blocked a vote on the Born-Alive Abortion Survivors Protection Act more than 75 times in the past few years. Now, three Republican House members are seeking to force a vote on the bill.

The bill does not restrict abortion, but only requires medical professionals to provide a baby who survives an abortion with the same level of medical care as any other newborn child.

“The right to life is the most sacred, inalienable human right afforded to us in the United States,” Rep. Kat Cammack, R-Fla., said in a statement announcing a discharge petition for the Born-Alive Abortion Survivors Protection Act.

A discharge petition is a procedural tactic that requires a minimum of 218 signatures from House members, a majority of the 435-member body, to force a vote on legislation.

The Susan B. Anthony List, a pro-life nonprofit group based in Washington, applauded Cammack, Scalise, and Wagner’s effort to protect the lives of all newborn babies after Cammack announced the discharge petition effort.

“You would think *no one* would have a problem requiring health workers to provide medical care to a living, breathing infant born alive during an abortion attempt. You would be wrong,” the pro-life organization wrote on Twitter.

“For too long, [House Speaker] Nancy Pelosi has blocked my commonsense legislation that protects the innocent lives of children born alive,” Wagner said in a statement.

We must take a stand and tell her the American people want the Born-Alive Act passed and signed into law.

This should not be a matter up for debate, and I hope every member of Congress signs this petition so these basic rights are enshrined into law.

More than 70% of Americans support the Born-Alive Act, according to Wagner and Scalise, who have repeatedly called on their Democratic colleagues to take action on the bill.

The discharge petition won’t expire during the 117th Congress. If the petition receives the required 218 signatures, whether this year or next, the Born-Alive Act would move to the floor for a vote. The petition will need all 211 Republicans to sign it, plus the signatures of seven Democrats, to reach the House floor.

“Why are House Democrats refusing to allow a vote on this commonsense legislation that will save lives?” Scalise asked, adding that the “American people deserve to know where their representatives stand on taking steps to end infanticide.”

In addition to requiring babies born during a botched abortion to receive the same level of care as any other newborn, the Born-Alive Act also requires health care professionals to report any violations of the bill to law enforcement and penalizes the killing of a baby born alive with penalties of up to five years in prison.

The bill also protects the mother of the child by giving her a civil cause of action and shielding her from prosecution for the death of a baby born alive after an abortion.

“The vast majority of Americans support the goal of the Born-Alive bill. The abortion lobby is the radical outlier, and policymakers should listen to the American people they represent,” Israel said. “Protecting born-alive babies is a matter of fundamental human decency.”