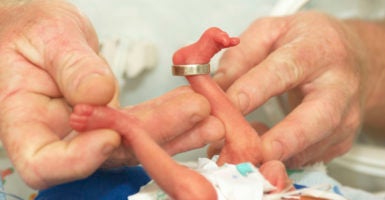 The Born-Alive Abortion Survivors Protection Act would require medical professionals to give the same medical care to a baby who survived an abortion as any other baby of the same age would receive. (Photo: PaulBroben/Getty Images)

Pro-life Republican leaders in the House held their own hearing Tuesday to make the case for a bill that would protect babies who survive abortions, after House Speaker Nancy Pelosi denied them the use of a regular committee hearing room.

“Over the course of 2019, radical legislators, and we’ve heard it all the way from New York to Illinois to Virginia, had moved to strip protections for babies who survive abortions,” Rep. Ann Wagner, R-Mo., said during the unusual meeting.

“I am shocked that [there] are even American politicians who want to deny babies lifesaving medical care,” Wagner said. “As a mother, as a grandmother, a legislator, and an advocate, I am grieved to find that we must defend something that I never thought Americans would have to fight for: lifesaving care for babies that are born alive.”

Among those present was Minority Whip Steve Scalise, R-La., the No. 2 House Republican. House Minority Leader Kevin McCarthy, R-Calif., although not attending, supported the hearing and had a statement read into the record.

Using a procedural tactic known as a discharge petition, Scalise  and Wagner have tried to force a floor vote on the legislation.

The strategy of a discharge petition, which isn’t usually successful, requires gathering at least 218 signatures from House members to oblige the chamber’s Democrat leadership to bring the bill to the floor for debate and a vote.

The Born-Alive Abortion Survivors Protection Act would require medical professionals to give the same medical care to a baby who survives an abortion as any other baby of the same age would receive, as well as to take the baby to a hospital.

If a newborn is intentionally killed, the abortion doctor would face fines or up to five years behind bars, according to a press release from Scalise.

In the House, Democrats have blocked Republicans 80 times from setting up a vote on the bill.

Scalise said Republicans held the hearing in a meeting room in the U.S. Capitol Visitor Center because Pelosi, D-Calif., denied them a committee hearing room, where lawmakers’ hearings ordinarily are held.

Rep. Debbie Lesko, R-Ariz., said America shouldn’t even be having a debate about whether survivors of abortion deserve medical care.

“If we can’t protect babies that are born alive, we have a major problem in our nation,” she said.

At one point, Wagner was overcome with tears.

“I live for the day when abortion is not just illegal but it is unthinkable, and what is happening to these babies that are born because they are unwanted is unconscionable,” she said.

Dr. Kathi Aultman, a former abortion doctor who is an associate scholar at the pro-life Charlotte Lozier Institute, recalled witnessing firsthand an example of the need for legislation to protect babies born alive after an abortion.

“A woman who came to me for complications after her induction abortion at 20-plus weeks told me that when the appropriate time came she was told to sit on the toilet and push,” Aultman said.

“She delivered a completely normal baby boy into the toilet, where he drowned. Babies can even survive dismemberment abortions or if the cervix is overdilated.”

Jill Stanek, a registered nurse who is national campaign chairwoman for the pro-life Susan B. Anthony List, testified that she spent the last moments with a baby who was born alive after an abortion and left to die:

One night a nursing co-worker was taking a little abortion survivor to the soiled utility room to die. When she told me what she was doing, I couldn’t bear the thought of this suffering child dying alone. He’d been aborted because he had Down syndrome and he was between 21 and 22 weeks old, about the size of my hand. And he didn’t move very much because he was using all of his energy attempting to breathe.

And I remember toward the end of his life I couldn’t tell if he was alive or not unless I held him up against the light to see if I could see his heart beating through his chest wall, because your skin is so thin at that age.

And after he was pronounced dead, I folded his little arms across his chest. I tied them together with a little string, I wrapped him in a shroud, and I took him to the morgue where we took all of our dead patients.

Stanek said such experiences during her nursing career illustrate the need for the Born-Alive Abortion Survivors Protection Act.

Rep. Roger Marshall, R-Kan., who is a physician, said his own experience in the medical field has made the need to protect babies born alive after an abortion all the more important.

“I had a moment or two to myself as I walked over here and I was contemplating today’s hearing, and I got to reflect on my career a little bit as an obstetrician [and] my wife as a neonatal intensive care nurse,” Marshall said.

“A big part of my training was how to deal with complications of pregnancy–cord prolapse, placental abruption …  and extreme prematurity. And I walk into this hearing [where] we talked about infanticide, and that’s a term … to say this is the murder of newborn babies. OK, let’s make that clear.”

This report has been corrected to say McCarthy supported the hearing and had a statement entered into the record, but did not attend.