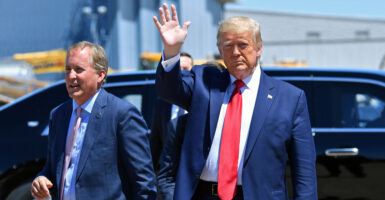 President Donald Trump says his campaign supports the lawsuit filed by Texas at the U.S. Supreme Court seeking new elections in Pennsylvania, Michigan, Georgia, and Wisconsin because of voting irregularities in those states.  A total of 17 states have joined the court challenge in less than two days.

“We will be INTERVENING in the Texas (plus many other states) case. This is the big one. Our Country needs a victory!” Trump tweeted Wednesday morning.

Trump was referring to his reelection campaign, not his administration. Intervention can come in the form of filing legal briefs in support of a plaintiff or plaintiffs.

Seventeen other states so far have joined Texas in the case before the Supreme Court, including Arkansas, Louisiana, Missouri, and Tennessee.

The New York Times reported that Trump has asked Sen. Ted Cruz, R-Texas, if he would make oral arguments in the case if it reaches the Supreme Court, and Cruz agreed. Cruz has argued nine times before the high court, mostly in his previous post as Texas solicitor general, the Times noted.

“It is past time for the president and our fellow states and elected officials to stop misleading the public about this year’s election and to acknowledge that the results certified in our states reflect the decisions made by the voters in a free, fair and secure election,” the three attorneys general said.

Georgia Attorney General Christopher Carr, a Republican, did not join the statement.

Texas alleges that the four other states violated the right of Texas voters when they changed election rules without authorization by their respective state legislatures.

The suit argues that each of the four states violated the Electors Clause of the U.S. Constitution (Article II, Section 1, Clause 2), which Texas argues vests “state legislatures with plenary authority regarding the appointment of presidential electors.”

The lawsuit asks the Supreme Court for a declaratory judgment that Pennsylvania, Michigan, Georgia, and Wisconsin violated election law and thus their electoral votes—as they currently stand—should not be counted.

The four states must “conduct a special election to appoint presidential electors.”

All four states have Republican-controlled legislatures. Michigan, Pennsylvania, and Wisconsin have Democratic governors and secretaries of state, who supervise elections.

The complaint by Texas has merit but it’s not likely the Supreme Court will hear it and highly unlikely that a majority of the seven justices would side with Texas if the court did hear the case, said Jason Snead, executive director of the Honest Elections Project.

“Texas is asking for extraordinary relief,” Snead told The Daily Signal. “From a practical standpoint, there is no way states could comply [by holding a new election]. States plan and prepare for months for elections.”

Snead added that if the high court rules in favor of Texas, it might offer a different form of relief, such as having state lawmakers appoint electors. That, he said, would open up a new set of political questions.

The cast of plaintiffs is growing as numerous Republcan attorneys general announced they were getting involved with an amicus brief.

“After reviewing the motion filed by Texas in the U.S. Supreme Court, I have determined that I will support the motion in all legally appropriate manners,” Arkansas Attorney General Leslie Rutledge tweeted Tuesday. “The integrity of our elections is a critical part of our nation and it must be upheld.”

Missouri Attorney General Eric Schmitt tweeted: “Election integrity is central to our republic. And I will defend it at every turn. … Missouri is in the fight.”

“This office pressed that argument in cases defending Tennessee’s election laws against pandemic-related challenges and in amicus briefs in cases involving similar challenges in other courts. This is not something new,” Slatery said in a public statement Wednesday. “Texas’s action in the Supreme Court seeks to vindicate the same important separation-of-powers principles, and that is why we joined Missouri’s amicus brief in support of that action.”

“Millions of Louisiana citizens, and tens of millions of our fellow citizens in the country, have deep concerns regarding the conduct of the 2020 federal elections,”  Landry said in a statement. “Deeply rooted in these concerns is the fact that some states appear to have conducted their elections with a disregard to the U.S. Constitution. Furthermore, many Louisianans have become more frustrated as some in media and the political class try to sidestep legitimate issues for the sake of expediency.”

The Texas lawsuit asserts the high court should decide the matter since Article III, Section 2 of the Constitution gives the Supreme Court—not lower federal courts—original jurisdiction over “controversies between two or more States.”

The complaint by Texas says that Pennsylvania Secretary of State Kathy Boockvar, a Democrat, “unilaterally” changed election laws on absentee and mail-in votes, as well as rules on signature verification, without legislative approval.

The lawsuit says that Wisconsin’s elections commission “weakened, or did away with, established security procedures put in place by the Wisconsin Legislature to ensure absentee ballot integrity.”

“Texas does a good job of describing what happened in each state and why the actions of government officials making unauthorized, unilateral changes in the rules may have violated the Constitution and affected the outcome of the election,” Hans von Spakovsky, senior legal fellow with The Heritage Foundation, wrote in a recent analysis for The Daily Signal.

“But by almost any measure, this is the legal equivalent of a Hail Mary pass,” wrote von Spakovsky, a former member of the Federal Election Commission and of Trump’s Presidential Advisory Commission on Election Integrity. “While the questions raised are serious ones, it is unlikely that the Supreme Court will address them at this time. As Texas points out, these issues will likely be repeated in future elections. If the Supreme Court does not take up these issues now, it may well have another opportunity in the future.”