A 2020 Election Redo in 4 States? Here Are the Details About Texas Lawsuit 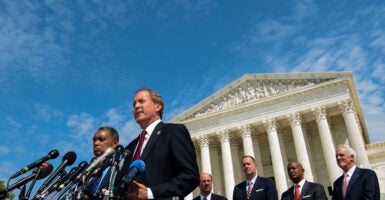 Texas’ attorney general, Ken Paxton (pictured here before the Supreme Court in 2019), has begun the process to file a complaint against Georgia, Pennsylvania, Michigan, and Wisconsin, claiming their 2020 presidential elections were unconstitutional. (Photo: Mendel Ngan/AFP/Getty Images)

If Texas has its way, the 2020 presidential election won’t be over soon.

The state of Texas has filed an unprecedented motion with the U.S. Supreme Court, asking for leave to file a complaint with the court against the states of Pennsylvania, Georgia, Michigan, and Wisconsin over the 2020 presidential election.

The motion alleges that changes made in election rules governing absentee ballots in those states by “non-legislative actors” violated the Constitution and “cumulatively preclude knowing who legitimately won the 2020 election and threaten to cloud all future elections.”

The motion filed by Texas includes the 41-page complaint and a 35-page brief making the legal arguments for why the Supreme Court should grant approval of the filing of the lawsuit, since Article III, Section 2 of the Constitution gives the Supreme Court—not lower federal courts—original jurisdiction over “controversies between two or more States.”

The complaint goes into great detail describing what happened in each state.

The complaint catalogues these and numerous other changes made in all four states by government officials, not the state legislatures.

According to Texas, these “amendments to States’ duly enacted election laws” violated the Electors Clause of the Constitution, Art. II, § 1, Cl. 2, which vests “state legislatures with plenary authority regarding the appointment of presidential electors.”

In other words, while the state legislatures have the authority to set the rules for presidential elections in their states—and thus could have made all of these changes if they had wanted to—other government officials in those states, including judges, did not have the constitutional authority to make these changes.

Second, the complaint describes how voters in different parts of these states were treated differently. For example, election officials in Philadelphia and Allegheny Counties in Pennsylvania set up a “cure process” for voters in those jurisdictions whose absentee ballots did not comply with state legal requirements. Those noncompliant ballots should have been rejected because state law does not allow such a procedure.

As a result of this behavior and similar behavior in other states, there was “more favorable treatment allotted to votes” in areas “administered by local government under Democrat control.”

This differential treatment, says Texas, violates the Equal Protection Clause of the 14th Amendment. It cites the Supreme Court’s 2000 decisions in Bush v. Gore, which “prohibits the use of differential standards in the treatment and tabulation of ballots within a state.”

Additionally, the one-person, one-vote principle “requires counting valid votes and not counting invalid votes.” This damaged Texas because in “the shared enterprise of the entire nation electing the president and vice president, equal protection violations in one state can and do adversely affect and diminish the weight of votes cast in states that lawfully abide by the election structure set forth in the Constitution.”

Finally, Texas argues that these states violated “substantive due process” requirements because their election practices—through both “intentional failure to follow election law as enacted by” their state legislatures as well as “unauthorized acts by state election officials and their designees in local government”—reached “the point of patent and fundamental unfairness.” The states “acted unconstitutionally to lower their election standards … with the express intent to favor their candidate for president.”

Texas argues that all of these unconstitutional actions changed the outcome of the presidential election, citing the actual vote totals in each state and the number of ballots affected.

The state is asking for a declaratory judgement that the administration of the election by Pennsylvania, Georgia, Michigan, and Wisconsin violated the Constitution; that their Electoral College votes cannot be counted; and to order that these states “conduct a special election to appoint presidential electors.”

This is an unprecedented lawsuit, and the Supreme Court may be extremely leery and disinclined to take any actions regardless of the merits that could upset the results of a presidential election.

Texas does a good job of describing what happened in each state and why the actions of government officials making unauthorized, unilateral changes in the rules may have violated the Constitution and affected the outcome of the election.

But by almost any measure, this is the legal equivalent of a Hail Mary pass. While the questions raised are serious ones, it is unlikely that the Supreme Court will address them at this time. As Texas points out, these issues will likely be repeated in future elections. If the Supreme Court does not take up these issues now, it may well have another opportunity in the future.