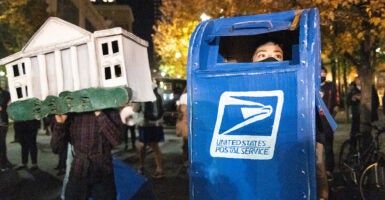 Republican state attorneys general say the Pennsylvania Supreme Court has jeopardized the nation’s constitutional balance of power by legislating from the bench and allowing late-arriving ballots to be counted. Now, they’re calling on the U.S. Supreme Court to intervene.

Three of the state attorneys general—Jeff Landry of Louisiana, Eric Schmitt of Missouri, and Mike Hunter of Oklahoma—held a virtual press conference Monday to announce the filing of an amicus brief in the Pennsylvania mail-in ballot challenge brought by the Pennsylvania Republican Party, which is before the Supreme Court.

“We are weighing in on a case, on a writ, that has been brought to the U.S. Supreme Court in order to bring additional arguments before the court as to why we believe the court should take up this matter,” said Landry, chairman of the Republican Attorneys General Association.

In unofficial results contested by President Donald Trump’s reelection campaign, Democratic challenger Joe Biden got 49.8% of the vote in Pennsylvania to Trump’s 49.1%. The president has not conceded the election, which major media outlets called Saturday for Biden after some put Pennsylvania in the former vice president’s column.

The matter at hand is the constitutionality of the Pennsylvania Supreme Court ruling allowing mail-in ballots to be received and counted in the three days following the Nov. 3 election.

Opponents appealed the move to the Supreme Court before the election, but a split 4-4 ruling by the high court let the Pennsylvania court’s decision stand.

“The actions by the Pennsylvania Supreme Court are one of the most breathtaking abuses of judicial authority that I have seen in my … years as attorney general,” said Hunter, Oklahoma’s attorney general.

Nearly a dozen state attorneys general have come together to urge the Supreme Court to review the constitutionality of the Pennsylvania’s court decision, which allowed late-arriving ballots to be accepted even if no proof existed that the ballot was postmarked by the end of Election Day.

Along with Landry, Hunter, and Schmitt, the attorneys general who signed the friend-of-the-court brief were Steve Marshall of Alabama, Leslie Rutledge of Arkansas, Ashley Moody of Florida, Daniel Cameron of Kentucky, Lynn Fitch of Mississippi, Alan Wilson of South Carolina, Jason Ravnsborg of South Dakota, and Ken Paxton of Texas.

The central concern of the attorneys general is that “the Constitution is very clear that it designates to state legislatures the ability to designate time, place, and manner frameworks for elections,” said Schmitt, who filed the brief.

The Pennsylvania Legislature determined that “all ballots need to be received on Election Day,” Schmitt said. “And the Pennsylvania Supreme Court rewrote that and said, ‘We are going to give it a little bit more time for ballots to come in. And, oh, by the way, they don’t even need to be postmarked by Election Day.’”

“Any ballot received after 8 p.m. [on Nov. 3] is an illegal ballot” in Pennsylvania, according to law passed by the state Legislature, the attorney general from Louisiana said.

The state attorneys general also argue that the Pennsylvania Supreme Court not only encroached on the Legislature by lengthening the time frame in which ballots could be received but compromised election integrity as a whole.

“Mail-in balloting is the most likely form of fraud that you will see,” Schmitt said. Instead of seeking to secure the integrity of mail-in votes, which are already prone to fraud, Pennsylvania’s high court loosened the restrictions.

The GOP attorneys general sought to make it clear that their amicus brief was not filed with a partisan political agenda, but out of concern for the precedent Pennsylvania’s Supreme Court ruling would set if it’s not overturned.

“Once all legitimate votes are counted and irregularities are corrected, then irrespective of who the president is, we will continue to ensure that the rule of law is protected,” Landry said.