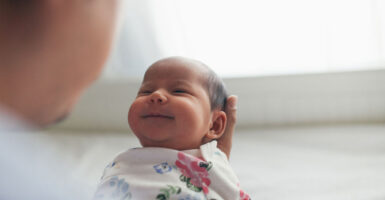 The Born-Alive Abortion Survivors Protection Act says a baby who survives an abortion deserves the same degree of medical care as any other newborn—it is a commonsense bill that is narrow in scope, saves lives, and addresses a real problem. (Photo: Tuan Tran/Getty Images)

Ann Wagner is the U.S. representative for Missouri’s 2nd Congressional District. She is the vice ranking member on both the house Financial Services Committee and House Foreign Affairs Committee.

Steve Scalise is the U.S. representative for Louisiana’s 1st Congressional District. He serves as the House Republican Whip.

Last Congress, House Speaker Nancy Pelosi directed House Democrats to block one specific piece of legislation over and over. Democrats designated one person to stand up and object, every single day, when Republicans tried to bring this bill to the House floor.

What legislation could possibly make Pelosi and House Democrats so afraid that they’d go out of their way to avoid even voting on it—after blocking it more than 80 times in total?

The answer is both surprising and distressing: The bill was the Born-Alive Abortion Survivors Protection Act. The Born-Alive Act simply says that a baby who survives an abortion deserves the same degree of medical care as any other newborn—it is a commonsense bill that is narrow in scope, saves lives, and addresses a real problem.

One of us, Rep. Ann Wagner, R-Mo., recently reintroduced the Born-Alive Act because—as a direct result of Democrats’ obstructionism—babies who survive an abortion still don’t have a legal right to the same medical care that other babies receive. The other, Rep. Steve Scalise, R-La., joined in reintroducing this lifesaving legislation as an original co-sponsor.

Unbelievably, Democrats have already blocked the Born-Alive Act in the new Congress. The average person on the street would be hard-pressed to tell you what Democrats have accomplished legislatively this year to help working families, yet Democrats still made sure to carve out time to object to a bill banning infanticide.

During a recent Senate vote, 52 senators—all Republicans except for two Democrats—voted in support of the Born-Alive Act. In the plainest terms possible, this means that 48 Democrats voted to deny babies in the hands of an abortionist a legal right to medical care. That’s obscene. It’s shameful. It should be front-page news.

How extreme are Democrats in holding this radical pro-abortion view? Look at it this way: 77% of Americans support the Born-Alive Act, while only 4% of Senate Democrats voted for the bill. Democrats are wildly out of step with the views of everyday Americans. So why do Democrats continue to oppose this legislation?

Democrats simply say that the Born-Alive Act restricts abortion, then vote no on the bill without ever giving any evidence or rationale to back up their claim.

The Born-Alive Act doesn’t limit abortion, it simply establishes the fact that a baby born during an abortion is a person like you or me, a person with inalienable rights and deserving of a shot at life, liberty, and the pursuit of happiness.

Of course, Democrats might then be forced to acknowledge that every baby is a human being. And so long as Democrats are beholden to pro-abortion radicals for funding, votes, and media cover, they will do everything in their power to prevent the Born-Alive Act from coming to the House floor for a vote or being passed into law.

The fact remains that the law of the land cannot and should not tolerate one premature baby being taken to the intensive care unit, while another baby—at the same age, born during an abortion—is left to die.

The Born-Alive Act doesn’t just deserve a vote on the House floor, it deserves to be voted on, passed, and permanently enshrined into law.

Lives depend on it.